Praesumo non narro peius of suum nuntius.
Democrat presidential candidate, the uber-Liberal Barack Hussein Obama, Junior, said he would personally filibuster the recent Foreign Intelligence Surveillance Act (FISA) bill that passed the U.S. House two weeks ago and passed the Senate last week. President George W. Bush singed the bill into law. This FISA version gives telecoms immunity, which heretofore had been an issue for many Democrats, especially the Militant Liberal and Progressive Wing of whom I term The Insane Liberal Clown Posse.

In prior versions of FISA, Obama was fiercely adamant and dead-set against the issue of telecom immunity.

He promised has Cult Followers that he would filibuster the bill if it contained telecom immunity.

He didn't. He voted for the FISA bill and supported telecom immunity and that it can be applied retroactively.

He lied to his most ardent supporters, supporters who are the most rabid anti-Bush and anti-Dick Cheney voters around. He lied to his voters, though. Obama plain old flip-flopped on an issue that is, or once was, vitally important to his Cultists.

He also lied to his most ardent, anti-Bush and Cheney supporters during his campaign when he told them, in no uncertain terms, that he would begin U.S. Troop withdraw from Iraq and that in 16 months our Troops will be out of there. He was the anti-Iraq War candidate and he preached this unchanging policy to his followers during all of his campaign and the primaries.

He now says that his formerly concrete 16-month withdrawal plan is no longer so solid; that is is now flexible, malleable, elastic. His 16-month timetable, well...not so much so strict now. Why, this certainly isn't what he promised his anti-war LeftWing Nuts!

On June 4th I published, "When The Affirmative Action President Thoroughly Disappoints His Base- And He Will - How Will They React?" The main point of that post is that according to a story I referenced in the Wall Street Journal, don't expect big changes from Obama in foreign policies from what we've had under President Bush.

Hot on the heels of gauging when Obama will disappoint his base comes The New York Times, in a piece by William Yardley titled Obama Supporters on the Far Left Cry Foul. It's a syndicated piece from the NYT and newspapers that carry the story can write other headlines for it. The Sunday, Minneapolis Star Tribune titled it: Progressives see betrayal in Obama's shifts.

Betrayal! Whew! A strong word! More derogatory than flip-flipping, reversing, posturing and posing. And since the story is from the NYT - the noted Liberal mouthpiece of the nation - it must be true! Obama supporters feel betrayed! Fabulous! 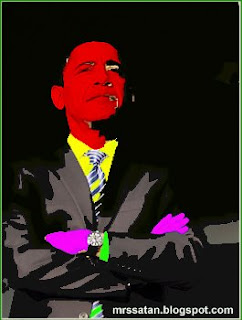 From the Times' piece:

...Martha Shade did what thousands of other people did [in Oregon before their primary], she registered as a Democrat so she could vote for Sen. Barack Obama.

"I'm disgusted with him," said Shade, an artist. He had such an opportunity, but all this 'audacity of hope' stuff, it's blah, blah, blah. For all the independents he going to gain, he going to lose a lot of progressives."

...alarm may be spreading among some Obama supporters whether left-wing bloggers or purists holding Obama's feet to the fire on one issue or another[.]

Obama initially said he would try to filibuster a vote [on the Senate version of FISA], but on Wednesday he was among 60 senators who voted for the measure, which to many liberals represents a flagrant abuse of privacy rights.

Joel McCraw, 27, a video engineer fron San Carlos, Calif., who writes three liberal blogs said Obama's shift on the domestic spying issue was a watershed moment. "This is the first time I've ever seen him lie to us and it make me feel disappointed."

Awwwwwwwwwwwwwww. The NYT says once ardent supporters of The Affirmative Action Candidate now are "disgusted" with him and admit "he lied" to them. (Sniff, sniff), "Oh.Dat's.So.Sad!" It sounds like the Obamabots could use a little more "Happy, Happy, Joy, Joy" in their lives. (Click on the black, triangle button following the word "Play")."

You can take my word on it, or you can search this blog to verify this (but I know what I write here), I've written several times that Real Liberals would support and vote for Nader. It's the faux, posturing and posing Liberals that support Obama. He's supporting and voting in exactly the same manner as Bush has asked from Congress - and received - on FISA. Bush, and Republican politicians who voted in the same manner as did Obama last week, were persecuted and endlessly tormented by the Obamabots for their stand on favoring "illegal wire-tapping and telecom immunity. Now, Obama behaves the same way and...most of his supporters shrug. Got hypocrisy, Dems?

So why no outcry from the posing Obama Cultists? Sssssssshhhhhhhhhhhhhhhhhh! It's a secret. They're hypocrites of the worst kind. Wisconsin U.S. Senator Russ Feingold fought tooth and nail against the telecom provision. Feingold is hailed as a True Liberal. He was one of the Democrats voting no on the Senate FISA bill last week, the same bill Obama voted for. But Feingold isn't running for president, is he Libs?

Below is something I made especially for all the little, mush-brained, blind Obamaniacs. Print out as many as you'd like of the below image. Used rounded safety-scissors when carefully cutting around the image. This blog and I assume no liability and is not responsible for any injury, paper cut or otherwise in your use of scissors. Those who engage in this voluntary activity agree to hold harmless forever this blog and its author, David Drake from any injuries. Print and cut around image at your own risk.

I suggest you use a pencil when circling your choice of A or B and what you fill in the blanks so you can erase what you write down. As often as Obama is changing his stance on issues these days, it will be easier to erase what he promised or said earlier. That way you can have something handy, keeping track of how frequently and to what degree Obama reverses himself on his promises and issues. If you're feeling really wacky and brave, use a pen! 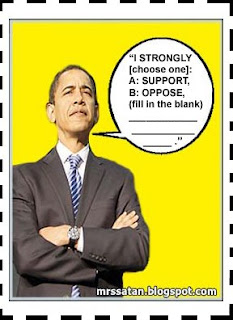 Obama supporters called Bush, Cheney and others Nazis because they supported FISA containing telecom immunity. This must mean that because Obama supports the same as Bush and Cheney, that he must be a Nazi too. This is a truism because Liberals apply it so...well, so liberally.

Don't you Obama Cultists just hate it when your Leader reverses himself on a promise - a promise, mind you - that he campaigned on, that got you to support and adulate him? And now, he spins a 180 and disappoints you on an issue that you call the shredding of our Constitution. How do you reconcile that within yourselves? It must be really tough to live your life as a Liberal, so many lies to remember, so many double-standards to maintain, such high levels of hypocrisy to affirm.

Comments:
The Times is being somewhat disingenuous with their statement that he would "try" to filibuster, what he actually said was nothing ever publically, of course, but his press release said, "Senator Obama unequivocally opposes giving retroactive immunity to telecommunications companies and has cosponsored Senator Dodd’s efforts to remove that provision from the FISA bill. Granting such immunity undermines the constitutional protections Americans trust the Congress to protect. Senator Obama supports a filibuster of this bill, and strongly urges others to do the same. It’s not clear whether he can return for the vote, but under the Senate rules, the side trying to end a filibuster must produce 60 votes to cut off debate. Whether he is present for the vote or not, Senator Obama will not be among those voting to end the filibuster.”

Yeah, I don't see that as "try," I see that as him co-sponsoring the damn amendment to take it out. But you know that I am crazy and cannot read nor write.

TD - thank you for the clarification on the precise languge used by Jeebus...oops, I mean Obama. So easy to confuse those two these days. So much alike they are.

What you added is even more fuel to the story, that being Obama - as you said - wanting to remove the telecom immunity altogether, but then doing almost the same thing and voting for the bill to pass. Those two things are almost the same. I think.