Sound from the television speakers:

"Because it's time to play: 'Is Barack Hussein Obama, Junior Smarter Than A Civics Class 5th Grader! ' (Wild applause)

Here's your host, The Ghost of The Late, Great Gene Rayburn! "(Wild applause) 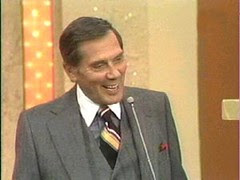 Barack Obama said the following: "My first day in office, I will bring the Joint Chiefs of Staff in, and I will give them a new mission. That is to end this war, responsibly, deliberately but decisively
."

What he doesn't know is:

a) The Joint Chiefs of Staff is unconnected to, and has nothing to do with, decisions made on the ground by the generals;
b) He be hittin' the crack pipe again;
c) Obama says asking this question is a personal attack on him;
d) He said, "I'm not smarter than a Civics Class 5th Grader who what now?"

The answer is A, "The Joint Chiefs of Staff is unconnected to, and has nothing to do with, decisions made on the ground by the generals."

The Obamalith - who wants to rule our country - is clueless about an issue that is so vitally important to the War in Iraq, a major - if not the priority item - in Obama's entire campaign, and he says he would consult with The Joint Chiefs of Staff about Iraq pullout strategy. Does his inexperience and lack of qualifications mean anything? The Left said George W. Bush's inexperience and lack of qualifications meant so much in the year 2000 election.

Obama saying he would consult the Joint Chiefs on Iraq is another example of his lacking gravitas.

Now, going hand-in-hand with the above item, check this out. I'm finally getting around to noting this story. Even if you've seen it before, read it again. It's a great story and I excerpted some of the significant points:

DOES Barack Obama intend to break the united front that the Bush administration has built to deal with Iran's nuclear ambitions? The question, posed by US allies in Europe and the Middle East, shows the growing concerns about Obama's contradictory remarks on the issue.

What isn't clear is whether Obama would insist that Iran respect the unanimous decision of the UN Security Council to stop uranium enrichment.

The new UN compromise package, presented by the European Union foreign-policy czar Javier Solana to the mullahs this month, is structured around the demand that Iran stop enrichment as prerequisite for dialogue.

Tehran, however, insists that the enrichment issue is "closed for ever" - clearly hoping that an Obama administration would endorse that position. If the US is likely to drop that key demand soon, there's no reason why Iran should meet it now.

Obama, in other words, pulled the carpet from under Solana's feet while the mullahs watched and chuckled.

European anxiety about possible US defection under a President Obama is reflected in an op-ed published last week by British Foreign Secretary David Milliband. In it, he insists that diplomatic efforts backed by UN resolutions shouldn't be interrupted or sidelined.

By ignoring the European Union and the United Nations, Obama would only encourage the Khomeinist leadership's most radical factions.

French President Nicolas Sarkozy also worries that an Obama administration might "give the mullahs what they want." Francois Heisbourg, who helped author Sarkozy's new national-defense review, warns that Obama's position could undermine confidence in US leadership.

"Dropping a unanimous Security Council condition would simply be interpreted by Iran and America's allies as unconditional surrender and America's friends would view this as confirmation of America's basic unreliability," Heisbourg, one of Europe's leading strategic analysts, told The Washington Post - "a hell of a way to start a presidential term." [Well Mr. Heisbourg, no one ever accused the DemocRATs of being reliable or that they could be counted on by their allies. - Drake]

Obama's potentially dangerous stance is the result of a naive belief that he could persuade the mullahs to do what several other countries have done - abandoning their nuclear ambitions.

The point is hammered in an op-ed co-authored by Zbigniew Bzrezinski last week. Bzrezinski, President Jimmy Carter's former national security adviser and now one of Obama's "grand old men," claims that Tehran is seeking the bomb because the Bush administration is threatening it with military action.

Hmm. The latest volume in the memoirs of former President Hashemi Rafsanjani, published last year, states that the mullahs started their secret nuclear program in 1984 have - 16 years before Bush won the Oval Office.

Rather than weakening what is, after all, his own side, Obama should support the EU-US package that Solana presented with unanimous support from the Security Council.

Let's review, shall we? European country leaders and U.N. officials (not that I care at all about what any U.N. official thinks of us, I don't) voice their concern about Obama's vast and sweeping inexperience and naivete in world politics.

It certainly doesn't seem by any stretch of the imagination that other world leaders are fonda Obama. Oh, the leaders of Hamas, Hezbollah, al-Qaida, the Taliban and the PLO simply loooooooooooooooove him in hugs and kisses. But the leaders of democratic countries sure aren't impressed by his inexperience.

Cowboy Diplomacy, Hussein-Style
And jeepers, from how he is described and perceived from the Post story, it seems like Obama certainly possess a go-it-alone strategy, making unilateral decisions. Why...this type of behavior is labeled by The Insane Liberal Clown Posse as "cowboy diplomacy" when it comes to President George W. Bush. Have any of the same people accused Obama, Junior of "cowboy diplomacy"?

And Bzrezinski...Bzrezinski? Bzrezinski is now one of Obama's Elite Team of Advisers? Whoa, he's a Carter Administration relic. And it was Bzrezinski along with Carter who funded Radical Islamist Terrorists long before - many years before - claims from The Left about Iran Contra, Ronald Reagan and Donald Rumsfeld. The Left doesn't like to admit this, they're in deep, deep uncharted waters of denial.

Comments:
Maybe Fraudbama should go by his rodeo name from now on. Somehow the name Assy McHat just fits him better.