Spain's parliament voiced its support on Wednesday for the rights of great apes to life and freedom in what will apparently be the first time any national legislature has called for such rights for non-humans.

"This is a historic day in the struggle for animal rights and in defense of our evolutionary comrades, which will doubtless go down in the history of humanity," said Pedro Pozas, Spanish director of the Great Apes Project. 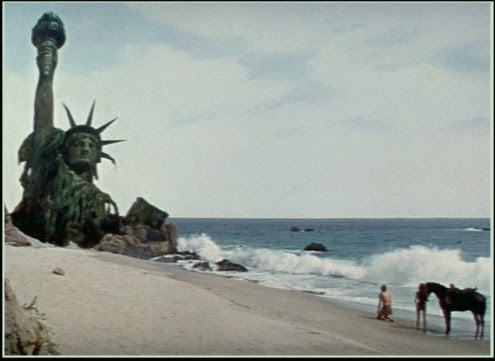 Fiction becomes reality.
Soon, American Democrats will be recruiting the Apes into their party
by promising them monetary benefits and health care.
// posted by David Drake @ 1:09 AM

Shhh! Don't say anything! If the Dems get wind of this not only will they give apes human rights but they will register them all to vote! Then you'll get slogans like "Primates in 2008" or "Monkey Government not Monkey Business". It won't be pretty.

Yeah Arc, WTF indeed. I dunno what the world is coming to anymore.

I certainly don't endorse painful medical research be done on any animals (only Liberals - Bwa ha - joke, just a joke...not really), but to give animals human rights? Oh, it sets a slippery slope.

The Dems will start recruiting animals and giving them voting rights. Oh...we are so doomed!

Using the term "monkey boy" will now be deemed a hate crime and throwing feces will become a form of protected free speech.

Again... sorry about that... that was supposed to be under "bugdrivel" and not some weird-O pretenting to have split personalities; you know it wasn't me right... it was her. :o)

Anyway... I did go rant a bit on bugdrivel.