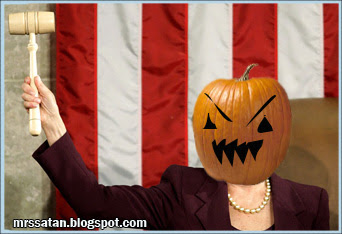 Nanny Pelosi Pumpkinhead, As relevant as last year's Jack-O-Lantern
Speakeress of The House, Nanny Pelosi, is ready to clamp down on Free Speech. The only speech she wants to permit is speech that agrees with her Liberal Agenda.

The speaker of the House made it clear to me and more than forty of my colleagues yesterday that a bill by Rep. Mike Pence (R.-Ind.) to outlaw the “Fairness Doctrine” (which a liberal administration could use to silence Rush Limbaugh, other radio talk show hosts and much of the new alternative media) would not see the light of day in Congress during ’08. In ruling out a vote on Pence’s proposed Broadcaster's Freedom Act, Speaker Nancy Pelosi (D.-CA.) also signaled her strong support for revival of the “Fairness Doctrine” -- which would require radio station owners to provide equal time to radio commentary when it is requested.

Experts say that the “Fairness Doctrine,” which was ended under the Reagan Administration, would put a major burden on small radio stations in providing equal time to Rush Limbaugh and other conservative broadcasters, who are a potent political force. Rather than engage in the costly practice of providing that time, the experts conclude, many stations would simply not carry Limbaugh, Sean Hannity, and other talk show hosts who are likely to generate demands for equal time.

“Do you personally support revival of the ‘Fairness Doctrine?’” I asked.

It's the Insane Liberal Clown Posse that wants to eliminate Free Speech, not the Conservatives as Liberals so often allege and on which they play The Fear Card.

The ILCP is so damn afraid of holes being poked into their lying, despicable messages that the only way they can try to control it is by reviving a primitive and archaic device like the Fairness Doctrine.

What's the matter ILCP, AirHead America not working out quite as you had hoped? Are ratings in the toilet for your propagandist networks of CNN, MSNBC, ABC, CBS, NBC and PBS? No one wants to hear your false rhetoric?

And the only way Peloshit and Company can retaliate is by silencing their critics? Why, how Marxist of them. Karl, Joe Lenin, Mao Tse Tung, Pol Pot and Adolf Hitler are applauding you from their graves.