Obama Can't Take Any Criticism:
How Can He Be President?

Presidential Election Year 2000: The Left said qualifications and experience were vitally important. The Left touted Albert Gore, Junior as the person with the resume for the White House. The Left said George W. Bush had no gravitas.

Presidential Election Year 2004: The Left said having Military Experience was a vital ingredient for whom we would elect. The Left touted John Kerry as the person with the resume for the White House. The Left, by this time, said George W. Bush was too full of hubris.

I am convinced that had Kerry - Who served in Vietnam - been a POW for five years like John McCain, there is no doubt that Kerry would have won the 2004 election. The Left would have been unrelenting in promoting and exploiting Kerry's years as a POW - and lording it over Bush - as the reason to elect him.

Presidential Election Year 2008: The Left throws out the window every single standard they set in both 2004 and 2000.

This year The Left says qualifications, experience and Military Service doesn't matter. These essential prerequisites that the Left so embraced for their presidential candidates in the past two elections are now rendered irrelevant, inconsequential and immaterial. Why? Because The Affirmative Action Candidate possess none of what The Left formerly said their candidate must have.

The candidate with a solid history of qualifications, experience and Military Service is John McCain. And I'm not even supporting or voting for him. 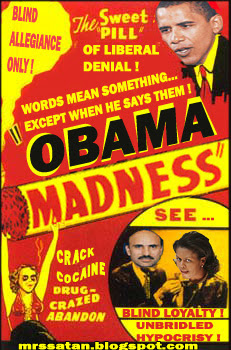 Which brings us back to The Affirmative Action Candidate, someone who is completely lacking in qualifications and experience. Who has no Military experience at all.

He is ashamed to be viewed as a Patriot by his demonstration of not wearing a U.S. Flag lapel pin and refusing to put his hand over his heart during the playing of The National Anthem. He is willing to unconditionally meet with leaders who sponsor terrorism, yet he hedges on meeting with General David Petraeus. He has done fundraising for the terrorist group Hamas. His friends are domestic terrorists William Ayers and Bernadine Dohrn. His personal relationships range from the scandal plagued Tony Rezko to Jim Johnson. His pastors preach from the pulpit messages of anti-Americanism, hatred and perpetuate racism and sexism. And perhaps worst of all, he partakes in what The Left has spent decades telling the general public is the most egregious sin anyone could ever commit; he is a cigarette smoker.

The Left and the Obama Cultists tell us that their Cult Leader cannot be criticized or examined or analyzed on any of his above actions or manifestations. What.A.Bunch.Of.Hypocrites.

According to the Obamaniacs, no one can utter a negative word about their messiah. Obama Cultists are having hissy fits and temper tantrum (yes, yes, I know - when aren't they) over what former Democrat now Independent U.S. Senator Joe Lieberman said about The Affirmative Action Candidate. AP:

...the latest betrayal has upset Democrats, who often answer in clipped but polite tones when asked about Lieberman. The reason: The independent still caucuses with the Democrats on most issues except the Iraq war, and he holds their slim political majority in his hands.

"There's a commonly held hope that he's not going to be transformed into an attack dog for Republicans," said Sen. John Kerry, D-Mass., an Obama supporter.

"If Israel is in danger today, it's not because of American foreign policy, which has been strongly supportive of Israel in every way," he said. "It is not because of what we have done in Iraq. It is because Iran is a fanatical terrorist, expansionist state."

Poor Ketchup Kerry. How quickly he forgets his own, independently reached conclusion that Saddam Hussein posed a threat to the world and that Hussein possessed WMDs. From Snopes:

"...without question, we need to disarm Saddam Hussein. He is a brutal, murderous dictator, leading an oppressive regime. We all know the litany of his offenses. He presents a particularly grievous threat because he is so consistently prone to miscalculation.

"So the threat of Saddam Hussein with weapons of mass destruction is real, but it is not new. It has been with us since the end of the Persian Gulf War."

The Obama Cultists don't want to see or hear anything negative - at all - about their Cult Leader. They turn a blind eye and a deaf ear to the actions, statements and relationships of The Obamalith. In their eyes, he is sacrosanct.

No Republican political candidate, especially a Republican presidential candidate, could escape from The Left firing the most vicious, merciless and unyielding criticism and personal attacks if that person said the same things and acted in the same manner as does The Obamalith.

The answer to why The Obama Cultists are so blind, so hypocritical and filled to the brim with such a double standard can be found in a quote from George Bernard Shaw:

"The moment we want to believe something, we suddenly see all the arguments for it, and become blind to the arguments against it."

No quote more accurately describes The Obama Cultists. Yet, Shaw's quote is exactly the same false allegation that The Left says about supporters of the Bush Administration. How can they not see what they apply to others they need to apply to themselves? The answer is easy, really. The Left's hypocrisy and double-standards flip-flop greater than the speed of light and without the tiniest intellectual thought as a supporting factor.