This compromise is a bitter pill for Democrats to swallow, given their previous staunch opposition to any immunity provision in the FISA bill.

Some Democrats are Fit.To.Be.Tied. With how their party members voted. "Oh.Dat's.So.Sad!"

Baby Thom Hartmann was beside himself over this issue on his Friday Liberal Talk Radio program. Cry Thommy, cry, whine, kick your feet, throw a temper tantrum, scream, drop to the floor and roll around from side to side with spittle flying out of your mouth and faux tear drops dribbling down your cheeks like the immature Marxist that you are, Thom Thumb.

Speakeress of The House Nanny Pelosi voted for it. So did Steny "Bartender, I'll have another!" Hoyer. So did Old Coot Mad Jack Murtha! Did Hell just freeze over and it hasn't yet been reported?

Voting against it - which is the same as voting against the safety of America from terroristic threats - was Ohio's Garden Gnome Dennis Kookcinich and New York's Jerry "No Neck " Nadler - and no, I did no Photoshopping of Nadler. That's just what a big and tall man he is. 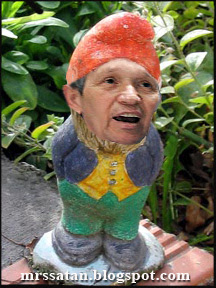 It's funny when Democrats become royally upset over what their own party does. Me? I find it wonderfully humorous!