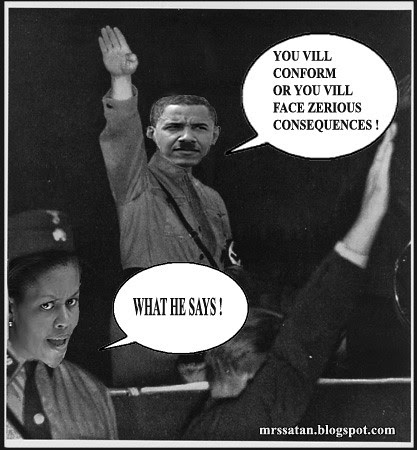 Because it's never too early to compare a Liberal Politician to Hitler!
From USA Today:

Rev. Michael Pfleger, the left-leaning Chicago Catholic priest who ridiculed Hillary Rodham Clinton this week in a racially-charged speech from the pulpit of Barack Obama's church, has contributed to Obama's state Senate campaigns, backed his ill-fated run for Congress and stumped for him in Iowa.

On Sunday, Pfleger mockingly quoted Clinton as saying she shed tears before the New Hampshire primary because "there's a black man stealing my show."

[Pfleger said]: "When Hillary was crying, people said that was put on. I really don't believe it was put on. I really believe that she always thought, 'This is mine. I'm Bill (Clinton's) wife, I'm white, and this is mine. I just got to get up and step up to the plate -- and then out of nowhere came, 'Hey, I'm Barack Obama.' And she said, 'Damn! Where did you come from?! I'm white! I'm entitled! There's a black man stealing my show! She wasn't the only one crying -- there was a whole a lot of white people crying." The congregation went delirious with joy.

To paraphrase that character from Hunt for Red October, "Senator, you have another insane pastor?"

Hillary Clinton's camp demanded Friday a specific rejection from rival Democratic White House hopeful Barack Obama of a priest who mocked her in racially-tinged language at his Chicago church.

Obama, hoping to finally clinch the Democratic nomination within days, was facing new questions about his past links to the Trinity United Church of Christ, following the latest fiery sermons from its pulpit.

The Illinois senator on Thursday released a statement saying he was disappointed with the comments by Catholic priest Michael Pfleger, but Clinton's aides said it did not go far enough.

"We assume that he will do so," said Wolfson, adding that Pfleger's mocking comments could hamper attempts to unite the Democratic Party.

Stick a fork in the Obama presidential campaign. It's done; beyond well done.

As I've said before, it will much easier for Republican Senator and Presidential Candidate John McCain to beat The Illinois Muslim that it ever would to beat Hillary "MrsSatan" Clinton.

If The Affirmative Action presidential candidate becomes the Dem candidate, we can look forward to a full five more months of more and more revelations that the people he associates with are simply the most hate-filled people on earth. We have a full five months ahead of us before the General Election for more examples like this to rear their heads, and they will. Oh, how they will!

It is mind-bogglingly amazing that The Left demonstrates the most blatant hypocrisy when politics is preached from the church pulpit when it is preached by a Democrat. We never hear the usual quaint Lefty response of "separation of church and state" when the spiritual message from within the church, or synagogue or place of worship is done on behalf of Democrat ideology. But oh good god, if any holy man preaches politics from the pulpit and that man of cloth is preaching Republican ideology, the Left has fits of precedent-setting hysteria, screaming their refrain of "separation of church and state" to the point of clinically defined madness.

Here's the video of Pfleger's so-called "sermon". Note his introduction: "...[Pfleger] is a friend of Trinity, he is a brother beloved..." Also note, right around the 1 minute 46 second mark, Pfleger saying, "I'm very unpolitical."

Comments:
As I mentioned over at Jon’s site, here’s yet another hate spewing pastor that Obama is claiming no knowledge to the level of hate which he preaches. 20 years and he had no idea until now? This proves one of two things:

While it is obvious to anyone with more than three operating brain cells (which rules out most liberals) that he is lying, let’s examine the alternative.

Taking Obama at face value on Pfleger and Wright, we must presume that he is a monumentally bad judge of character. If he could not in two decades recognize that these men held such hateful and off-the-mainstream views, how are we to feel confident in his abilities to make good deals with bad men? This is the guy running on the notion that he is the best candidate to negotiate peace in the world!

It all makes me crazy! I see stuff like this and ask myself, “Self, are people really this gullible?” Then I remember that someone actually talked a movie studio into making and releasing ‘Caddyshack 2’.

I don't know how much more clear it has to get in terms of where Obama stands on the things he gets ticked off about when asked. There's nothing we're allowed to ask.

Gee, I wonder why?

Bad - yes, people are that guillable. It's not based on substance, just feelings/emotions.

Braden, The Obamalih is not to be questioned. Either were Stalin, Hitler or Pol Pot!

Thanks for visiting and commenting, guys!