It just might be that The Obamalith isn't qualified to run for the office of President of the United States. It just may be that he cannot occupy the Oval Office because he's not a natural born citizen! Wouldn't this just send Obama's Cult Followers into conniption fits?

The Obamalith claims he was born in Hawaii. Yet, Hawaii's statehood was never ratified in its 1893 Treaty. Technically, Hawaii is "occupied" - annexed is the more appropriate word - by the United States. Neither was Hawaiian statehood approved or sanctioned by its Royalty or Queen Liliuokalani, nor did native Hawaiians ever have the opportunity to vote for or against statehood!

So it would appear that The Affirmative Action Candidate lacks the citizenship credentials to occupy the White House!

And no, it's not just me saying this. It is an issue raised by a blogger and Obama supporter who lives in Hawaii:

Barack Obama was born in Hawaii.

One could even make the argument that being born in Hawaii, he's a Hawaiian national! I believe the most compelling legal analysis based on Hawaiian kingdom and international law and precedent, is that the Hawaiian national population today is comprised of descendants of Hawaiian subjects and those foreigners who were born in the Hawaiian Islands prior to 1898.

As an American, I participate in the political system that's been imposed here, and as a Democrat, I will be caucusing for Obama[.]

...for the presidency, the constitution specifies not just nationality, but a "natural born citizen" so my understanding is that jus sanguinis does not apply to that specific requirement, only jus soli. One has to be born in the United States to be president, and technically, Obama wasn't. 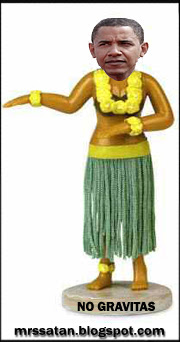 Aloha means both "hello" and "good-bye."
In that case, "Aloha, Affirmative Action Candidate! Aloha!"
The last thing we need is a President who would be friendly to subversive ideology that is not in the best interests of the United States for no other reason than he is not a U.S. citizen. The second-to-the-last thing we need is a subversive President who is secretly a Muslim and whose policies are anything but in the best interest of our country.

As are children born of a Jewish mother automatically considered included in the Jewish faith, the same holds true with Islam. The children born of a Muslim father are considered included in the Islamic faith. Obama's biological father - as far was we know - was a Muslim. Obama's stepfather was an Indonesian Muslim. The Islamic religion would deem Obama as an apostate Muslim, which in no way means that he cannot someday revert back to his Islamic faith.

What if Obama is elected and after being sworn into office he decides to convert back to the Islamic religion? This could easily happen and this alone is a reason to deny him the presidency.

Obama is a Muslim, perhaps a furtive Muslim, but nevertheless a Muslim. But far more important and significant, his citizenship - or more appropriately, his lack of it - may disqualify him from the office he seeks.

The citizenship of Ted Kennedy's Poodle needs to be vetted. We need to see his original and certified birth certificate. We need to see the original and certified birth certificates of his mother and his Muslim father. We need irrefutable evidence that The Obamalith is a United States Citizen and that he meets every Constitutional requirement necessary which qualifies him as a legitimate U.S. citizen and as a legal candidate for the White House. To date, Obama has not proven this beyond any reasonable doubt.

I'm surprised that the Clinton Crime Family hasn't yet brought this issue into the spotlight. Maybe this is their "June surprise".

Comments:
Has anyone told Senators Inouye and Akaka this? My gut says they would be upset but then maybe just maybe they could swing a deal with Japan to stay in power.

Maybe Hawaii can be referred to as "East Japan"?

Akaka. another word for shithead.

Thanks for visiting and commenting, as always EC and Bin!

Ah the internet. The last refuge of the deranged and maladjusted. While the rest of us debate about policy issues and whether or not these are the steps we must take to improve, others make outrageous claims and perpetuate boldfaced lies. God bless Democracy.

Hey, Angelo, you want to read some really deranged and maladjusted shit, check out Daily Kos, or Eschaton, or Think Regress, or DemocratUnderPants.

I've not made any outrageous claims or perpetuated boldfaced lies. You simply cannot handle the truth. God Bless Idiots, they deserve life too!