Obama Does A Huckabee With The Cross

The Obamalith borrows a campaign strategy using a white cross to...well, to appeal to the religious voters. I guess The Illinois Muslim thinks that by using a cross in his campaign literature they will simply forget that he consistenly voted for killing babies that survived the horrific procedure of abortion.

Below is the image and here is the story. CBN.com:

I have been telling Brody File readers for months that if Barack Obama becomes the Democratic nominee he will make a pitch to win over independent/moderate Evangelicals. Well, we now have evidence.

Look at the flyer below: 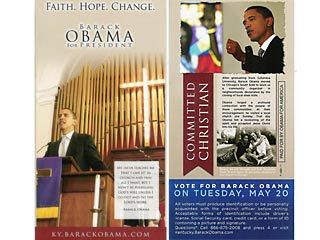 In Kentucky, he is making a direct appeal to Evangelicals with flyers that mention his conversion experience and they highlight a big old cross. Remember Mike Huckabee’s supposed subliminal cross in his Christmas campaign ad? Well, the Obama campaign ditches the subliminal and goes for the in your face cross.

Larger sized image of the above is reproduced here.

"I can't HEAR YOU! Can I get a 'Jeebus hates America' AMEN from ya?" Congregation (much louder): AMEN! Kill the babies! Kill them! Stick a tube in their head and suck their brains out! AMEN! AMEN!

Jesus must be proud of Obama, Rev. Jeremiah Wright and all the other baby killers in the Liberal and Progressive movement. Muslims enjoy bloodshed, so it shouldn't come as any surprise that Obama likes the killing of American babies - even American black babies.