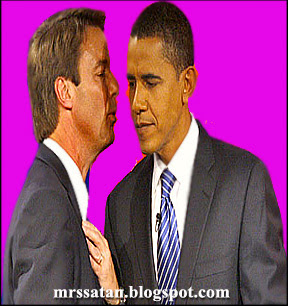 Everybody knows that John The Sissy Edwards said he is not comfortable around gay people.

Everybody knows that The Obamalith has surrounded himself with spiritual advisers that manifest the most severe type of homophobia, such as Rev. James T. Meeks and Donnie McClurkin.

The Sissy is against gay marriage. (Link source: On The Issues)

The Obamalith opposes gay marriage and thinks it is perfectly acceptable to permit six-year old children to learn about the homosexual lifestyle. On The Issues:

Amazingly, the overt homophobia from both The Sissy and The Obamalith doesn't matter to the Insane Liberal Clown Posse.

But by god, if the homophobia of Edwards and Hussein Obama was articulated by any Republican politician or candidate, gay advocacy groups would be making this their number one critical issue with the volume cranked up so loudly you'd think it was the only issue that mattered. 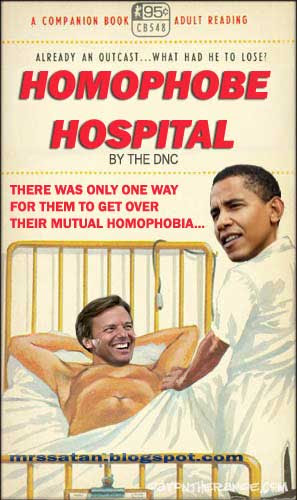 Comments:
I just want you to know that now I have to disable my firewall to actually come to this site. F-Secure blocks you because it's gay-porn.

One has to ask why the drive bys are so silent on stuff like this where Obama is concerned.

I watched CBS News a couple nights ago, just to see what Katie Couric was talking about; and I kid you not, it looked as if she were creaming her panties talking about Obama and how wonderful he is.

Sorry about that firewall thing Two Dogs. Not much I can do about that. I'll try to tone down any future ridiculing of the Dem Homophones of the Sissy and the Affirmative Action Candidate, sans anything too graphic.

Oh - you're second comment about it being "NASTY" - I'm gonna consider that a badge of honor! ;-)

I think both you and I need to work on our double standards and hypocrisy. heh! Jus' kidding, I know you know that.