Don't Tell Bob Byrd A Black Man
Is Touching Him

John McCain Is Too Old to serve as President?!?!?

The Ageists on the Left are out in full force, making an issue of John McCain's age. This is especially humorous when considering that The Left loves the 91 year old West Virginia U.S. Senator Robert "The Klansman" Byrd.

I wonder if The Klansman is aware that he is being helped by...(GASP!)...a Negro?!? See that black hand, which I circled? I'll bet the old and doddering Klansman made a beeline for the men's room to wash those Negro germs off his clothing. 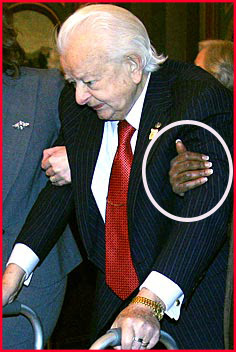 91 years old, a racist and KKK member Bob Byrd; the Dems will take anyone into their party as long as they are a committed Marxist.

“The Klan is needed today as never before and I am anxious to see its rebirth here in West Virginia. It is necessary that the order be promoted immediately and in every state in the Union. Will you please inform me as to the possibilities of rebuilding the Klan realm of W. Va.”

“I will never submit to fight beneath that banner with a Negro by my side. Rather I should die a thousand times, and see Old Glory trampled in the dirt never to rise again, than to see this beloved land of ours become degraded by race mongrels, a throwback to the blackest specimen from the wilds."

“There are white niggers. I've seen a lot of white niggers in my time. I'm going to use that word. We just need to work together to make our country a better country, and I'd just as soon quit talking about it so much.”
Source: Think Exist: Famous quotes

Good thing this old, fossilized, one-foot-in-the-grave racist is a Democrat. If he'd have been a Republican, instead of spending the last 55 years in the U.S. House and then Senate, he would have been selling used cars on some desolate lot.

Comments:
Thought I would leave this link to a Washington Post Article from 2005 for those interested in the former Grand Dragon.

That black man has the longest nails I have ever seen on a dude! :-)

Thanks for the story link, Bin!

I glanced at it and realized I must immediately save it, and did. It's on my required reading list for later this evening.

Dane - you know, you are right! I didn't realize it until you mentioned it but yeah, those are long nails.