Shhhhhhhhhhhhh! Be very, very quiet. We wouldn't want Minnesota's ACLU Executive Director Chuck Samuelson to get wind of this story. You know how the ACLU is when it comes to religion being taught in taxpayer funded public schools. Shhhhhhhhhhh!

Don't anybody tell Chuck al-Samuelson about this, okay? 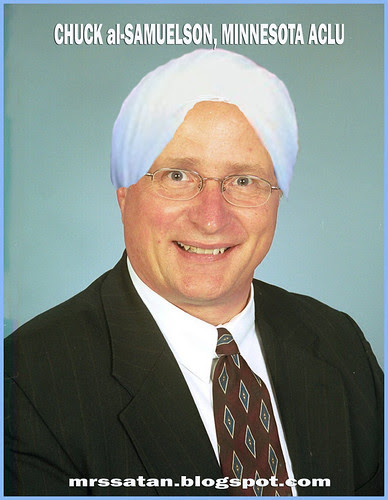 Evidence suggests, however, that TIZA is an Islamic school, funded by Minnesota taxpayers.

TIZA has many characteristics that suggest a religious school. It shares the headquarters building of the Muslim American Society of Minnesota, whose mission is "establishing Islam in Minnesota." The building also houses a mosque. TIZA's executive director, Asad Zaman, is a Muslim imam, or religious leader, and its sponsor is an organization called Islamic Relief.

Students pray daily, the cafeteria serves halal food - permissible under Islamic law -- and "Islamic Studies" is offered at the end of the school day.

Zaman maintains that TIZA is not a religious school. He declined, however, to allow me to visit the school to see for myself, "due to the hectic schedule for statewide testing." But after I e-mailed him that the Minnesota Department of Education had told me that testing would not begin for several weeks, Zaman did not respond -- even to urgent calls and e-mails seeking comment before my first column on TIZA.

Now, however, an eyewitness has stepped forward. Amanda Getz of Bloomington is a substitute teacher. She worked as a substitute in two fifth-grade classrooms at TIZA on Friday, March 14. Her experience suggests that school-sponsored religious activity plays an integral role at TIZA.

Arriving on a Friday, the Muslim holy day, she says she was told that the day's schedule included a "school assembly" in the gym after lunch.

Before the assembly, she says she was told, her duties would include taking her fifth-grade students to the bathroom, four at a time, to perform "their ritual washing."

Afterward, Getz said, "teachers led the kids into the gym, where a man dressed in white with a white cap, who had been at the school all day," was preparing to lead prayer. Beside him, another man "was prostrating himself in prayer on a carpet as the students entered."

"The prayer I saw was not voluntary," Getz said. "The kids were corralled by adults and required to go to the assembly where prayer occurred."

Islamic Studies was also incorporated into the school day. "When I arrived, I was told 'after school we have Islamic Studies,' and I might have to stay for hall duty," Getz said. "The teachers had written assignments on the blackboard for classes like math and social studies. Islamic Studies was the last one -- the board said the kids were studying the Qu'ran. The students were told to copy it into their planner, along with everything else. That gave me the impression that Islamic Studies was a subject like any other."

Blogger News Net also has a fine analysis of TIZA.

Surely the Secular Left will be outraged that religion is being indoctrinated into students at a pubic and taxpayer funded school, right?

But don't let Chuck al-Samuelson find out about this...okay? You know how the ACLU gets when it comes to taxpayer funded public school, religion and prayer.

Comments:
Man, call me crazy, but the sand took is just not working for Chuckie. It's ain't his look.

Two Dogs - Chucky, the Exec Dir of MN ACLU - goes ballistic on any issue of Christianity or Judaism even remotely tied to any school function.

Now we'll see how al-Samuelson responds to Islam being promoted and taught in a taxpayer funded school. So far, Chucky is not making anywhere near the kind of waves he makes when it comes to Jeebus.

Braden - footbath stations, in all public schools, funded by the taxpayer will be next. And prayer rugs. And classes on how to slice the throat of your victim and how to inflict the most pain.

And Chuck al-Samuelson will be dutifully silent.

What is minnesota thinking Dave?

And this is precisely why we should ALL refuse to pay school taxes until the public school system gets off their asses and stops catering to these left wing moonbat ideologies.

If we ALL refuse to pay the school taxes, will they throw us ALL in jail?

But....America snores on while watching their "Dancing with the stars" and "The view" along with the rest of the brainwashing bullshit Hollywood poops out.

EC - I don't know what MN is thinking. It's more like the MN ACLU cutting slack for Islam and holding it to a more ACLU-friendly standard than they would if Christianity or other religious views - exempt Islam, of course - were being taught in taxpayer funded public school.

I dunno Braden, getting ALL of us to withhold taxes is a bold idea. It would have to have 99% of the pop. behind it to work. Would everyone do it?

I guess that's why "the price for freedom is eternal vigilance," as Thomas Jefferson said. WE have to hold schools like TIZA accountable, and if the ACLU won't do it, then others will, and will point out the hypocrisy of the ACLU.

No, thank God its not true, its just very bad reporting done by some really stupied people that have put children’s life’s in danger by causing terroristic threats by Americans who have hijacked our freedom and trying to spread their terroristic ideology to the rest of us.

Below link has a follow up video and artical done couple of days ago.

Tom - can you resubmit those URLS in full, because it looks like they were truncated and don't lead anywhere.

I'm not sure what part of the story is "no, thank God its not true", or who you're saying the Americans are who hijacked our freedoms. You have lost me. Please explain. Thanks.