There is a long list of things where Democrat U.S. Senator and Presidential candidate Barack Osama Bin Laden Obama has lied, been less than honest, attempted to rewrite his own history and flip-flopped on many issues where he's been caught fibbing.

It is what he said in the Wednesday night debate that is so incredulous and eye-opening, with misdirected anger and fallout from Obamaniacs directed at debate moderator ABC News Anchor Charlie Gibson.

The debate topic was raising the capital gains tax. Obama said he favored raising the top capital gains rate to 28%. Doing this, according to the Friday, April 18, 2008 Wall Street Journal is a "tax hike on some 100 million Americans who own stock, including millions of people who fit Mr. Obama's definition of middle class."

Twice - twice - Charlie Gibson tried to explain to Obama that raising the rate of capital gains taxes results in less revenue for the government and twice Obama denied this proven history of this fact.

From the WSJ, (italicized emphasis the WSJ):

[Obama said], raising the capital gains tax is necessary, "to make sure...that our tax system is fair and that we are able to finance health care for Americans who currently don't have it and that we're able to invest in our schools. And you can't do that for free."

But Mr. Gibson had noted that higher rates yielded less: revenue. So the news anchor tried again: "But history shows that when you drop the capital gains tax, the revenues go up?" Mr. Obama responded that this "might happen or it might not. It depends on Wall Street and how business is going."

When the tax rate has risen over the past half century, capital gains realizations have fallen and along with them tax revenue. The most recent such episode was in the early 1990s, when Mr. Obama was old enough to be paying attention. That's one reason Jack Kennedy proposed cutting the capital gains rate. And it's one reason Bill Clinton went along with a rate cut to 20% from 28% in 1997.

The assessment of Obama by the WSJ is this, (italicized emphasis the WSJ):

Either the young Illinois Senator is ignorant of this revenue data, or he doesn't really care because he's a true income redistributionist who prefers high tax rates as a matter of ideological dogma regardless of the revenue consequences. 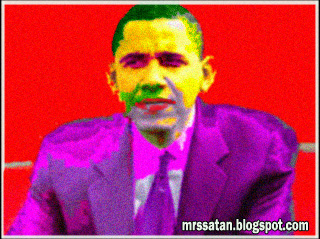 Obama has to know raising the rate on capital gains will reduce revenue, but he doesn't care because he's a populist. He's a populist who doesn't think anyone will notice, or question him on his beliefs or policy. But Charlie Gibson did, and boy did he and ABC get a trashing from the rabid Obama supporters who believe their Golden Candidate is above any second-guessing.

In the debate Hillary Clinton also said she would consider raising the capital gains rates and also promised not to raise taxes on middle class Americans, "people making less than $250,000 a year."

"If you raise the payroll taxes, that's going to raise taxes on [people earning $97,500 in 2007 and is $102,000 this year," said] Gibson. Ignoring the no-tax pledge he had made five minutes earlier, Mr. Obama explained that such a tax increase was nevertheless necessary.

Back to Ted Kennedy' Poodle; he's a smart and educated politician. He knows raising the rate on capital gains taxes results in less government revenue. He thinks he can play fast and loose with the facts, Charlie Gibson called him on it and the Obamasphere, in their usual manufactured double-standard feigned reaction, heap blame, lashing out at Gibson and ABC.

If the issue of taxes and how Obama feels about them - and how he flip flops on them - isn't a legitimate issue for any debate moderator to pursue questioning, what is?

The real irony here is that some of the Obamaniacs - especially those who now disdain Hillary - were part of the same crowd who wanted to censor ABC Television for their mini-series critical of the Clinton Administration, "The Path To 9-11." The hypocrisy of some people knows no bounds, does it?

If Obama is so sincere and honest, and has nothing to hide and is so knowledgeable on all the important issues, why are his supporters so deathly afraid of him being asked hard questions - sometimes more than once? Of what are they afraid?

Comments:
It's OK to lie to the stupid gun toting, bible thumping masses. After all, it's not nice to come out and say that the poodle and the rest of the commiecrats are going to fuck (tax) the eyes clean out of our heads.

Oh, if Bush had made the same statement about taxes and revenue the press would have been calling him "economically challenged" at best, but Obama makes this, gets asked about it TWICE - and the Poodle Brigade goes batshit crazy. These people are insane.