Obama Toasted Auchi And So Much
Else Collapsing In ObamaWorld

It was just the other day we had the news that Osama Bin Hussein Obama didn't recall meeting Nadhmi Auchi.

Thursday, in the Tony Rezko trial, there was testimony that Obama not only attended parties where Auchi was present, but that a Chicago Sun Times columnist reports that a source claims Obama had not only attended the April 2004 event but also "made a few toasts." ABC cites the Sun Times as their source.

Hamas leader Ahmed Yousuf endorsed Barack Hussein Bin Obama as the person he'd like to see in the White House. Hamas, you may recall, advocates and practices such delightful things as suicide-homicide bombers and using children as a delivery method of these types of terrorist acts.

It will be interesting to watch and see how long it will take before Obama vociferously renounces the endorsement of Ahmed Yousuf. Why it isn't the immediate response from Obama is purely politically transparent. He doesn't want to upset his like-minded America haters, like Rev. Jeremiah Wright.

The Left would be howling and demanding John McCain denounce any endorsement from someone controversial, and to call Yousuf controversial is an understatement.

So, when will Obama repudiate the endorsement from Yousuf? Well, start the countdown, it will probably be a long time. Obama is the Terrorist-friendly candidate and flavor of the the election year.

And like his connection to Underground domestic terror group's William Ayers, who said of 9-11 that he "wished the terrorists had done more." This is someone Obama was associating with in 2001! Obama couldn't even stammer together a response, instead, he criticized that the issue was being raised. The Telegraph:

Mrs Clinton said: "If I'm not mistaken, that relationship with Mr. Ayers on this board continued after 9/11 and after his reported comments, which were deeply hurtful to people in New York and, I would hope, to every American, because they were published on 9/11, and he said that he was just sorry they hadn't done more."

Mr Obama protested: "The problem is that that's the kind of politics that we've been accustomed to. And I think Senator Clinton learned the wrong lesson from it because she's adopting the same tactics.

No, we want you to answer the question , Hussein. 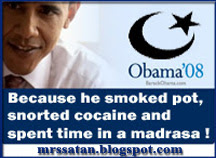 Richard Adams, writing at the Guardian, called the debate The Worst. Debate.Ever:

It took almost 50 minutes into the debate before the first question came that resembled something to do with policy, rather than warmed-up campaign sniping phrased as questions, and which ran the gamut from banal to inane. At the end of the debate members of the crowd appeared to be booing moderator Charlie Gibson.

The blogosphere was not happy. Not happy at all....

"In perhaps the most embarrassing performance by the media in a major presidential debate in years," began Greg Mitchell on the Huffington Post, "ABC News hosts Charles Gibson and George Stephanopolous focused mainly on trivial issues as Hillary Clinton and Barack Obama faced off in Philadelphia. They, and their network, should hang their collective heads in shame."

I watched the last 45 minutes of the Clinton-Obama debate, a point where - well, even by then a high-school debate team should be feeling at least secure in their delivery and comfortability - but not Obama who seemed distracted, responding in yet another debate with broad and sweeping vague generalizations all lacking specificity.

His response at first on not taxing anyone earning under $95,000 a year and a few minutes later saying taxing people making under $250,000 - when made of aware of his error - replied, we'll figure that out later. Uh, no - you should be able to answer it after all this time. Why can't he?

And the whining and crying and tantrums being thrown by the Obamaniacs...why, they just don't think that their Cult Leader should be subject to such hard questions. What's the matter, Obama-ites, can't your candidate stand up to big bad Charlie Gibson and George Stephanopolous?

Awwwwwww, that's so sad. The Senator From Illinois can't take the heat from a couple of ABC reporters? What's he going to do in the White House? Scary! Obama has no gravitas. None.

Comments:
I was just writing about how I feel this election is much like professional wrestling... what a joke.

You sound "bitter." Are you clinging to your religion and guns again? ;-)