Unlike his basketball game in Indiana (where he made sure to be photographed wearing a USMC T-shirt), The Obamalith played some hoops with the North Carolina Tar Heels.

Only this time The Obamalith WAS NOT WEARING a USMC T-Shirt. 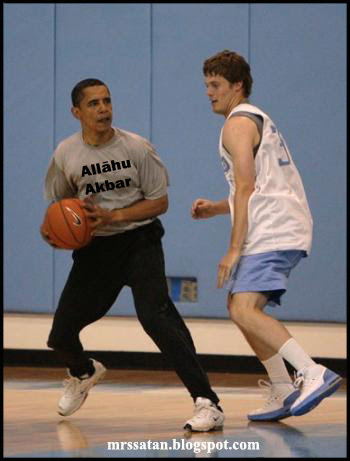 And he wasn't even wearing a U.S. Flag lapel pin.

He did, however wear the usual turban and Muslim garb permitted under Islamic law.

Comments:
Good one David. Thanks for coming by. The mt did not work so went back on wordpress....sigh....

Thanks for comming by!

Hi Layla, thanks for letting me know the URL stays the same. I can't imagine how much work must go into switching hosts, which is why I've never attempted that. Maybe someday when I could afford to pay someone else to do it for me, which in practice means I'll be on Blogger forever. That's okay though, for me it's a decent platform and that it's free the price is certainly right.

I very much value our camaraderie. Thanks for visiting and commenting.