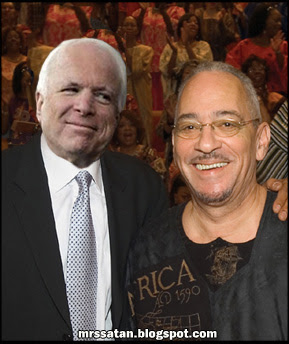 McCain made the announcement while at a campaign stop in New Orleans, LA in an area hit hard by hurricane Katrina, saying "I am proud that Rev. Wright has accepted my offer to be my Vice President."

Reporters peppered the Arizona Senator with questions why he chose Wright. "This is just another of my poking the Republican party in the eye with a sharp stick," giggled McCain, "I like stirring the pot like this because I'm a Maverick, damn it."

Wright, who admitted he was as shocked as anyone being offered part of the McCain ticket, said, "It took a few moments for me to accept his offer, but I figured now that I retired from the church I have nothing better to do."

Sofa Davenport, McCain spokeswoman, said the selection of Wright is based on appealing and bringing to the McCain campaign, "the bitter vote."

A reporter caught up with former Republican presidential candidate and ex Massachusetts Governor Mitt Romney just as he exited a Cost Cutters. Romney was considered to be on the so-called "short list" of VP possibilities for McCain. Romney, reacting to news that McCain has selected Wright said, "Yeah, ironically enough this news does make me bitter."

Comments:
Too close to the truth but still funny. Hes just he kind who would use a sharp stick to poke his own party in the eye. love the Photoshopping of the image.

Hey EC - who knows with McCain and his love for biting the hand that feeds him. I doubt he'd pick someone as far Left as Wright, but who the hell can tell with McCain?

Thanks for commenting and visiting, as always.