American Liberal and Progressive politicians and their supporters are mourning the death of one of their heroes and best friends, terrorist Abu Obaidah al-Masri.

It is believed that al-Masri died sometime over the past two months from hepatitis. BBC:

Abu Obaidah al-Masri, the militant chief believed to be a senior planner of al-Qaeda's attacks in Afghanistan, has died, US intelligence sources say.

They said they believed Masri, a major operational figure within al-Qaeda linked to attacks in the UK and elsewhere, died of "natural causes".

"The sense is that he is dead," a US official said.

A US official told the BBC that Masri had apparently died within the last two months, probably of hepatitis.

Responsible for many worldwide acts of terrorism, al-Masri was the architect of the London subway and bus bombings in July 2005 and of the thwarted plan in 2006 to blow up multiple jet airliners traveling from London to the United States.

The Libs are happy when someone like Charlton Heston dies. But they mourn the death of terrorists like al-Masri. Why? Because both al-Masri and Liberals hate America. 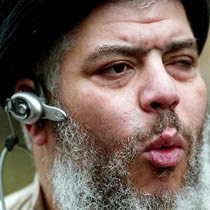 al-Masri, as you can tell, strictly keeping Halal and adhering
to 7th Century Islamic culture...um, except for the Bluetooth.

Comments:
What??! You mean there was no Bluetooth when Islam was being forged in the barbaric Dark Ages? Do they know that?

And, also, I posted a comment on your Absolute Fraud post as "anonymous". This was an oversight. It's TSA...

It was only Light Blue Tooth, or BlueTooth Lite back in the 7th century. And the battery only lastest 27 seconds for talk time and 1 minute and 3 seconds for standby. Yeah, it was an immense advancement in technology for its time.