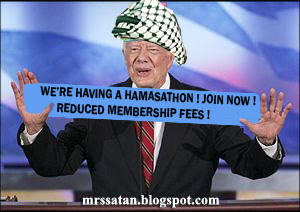 Well, it's official. Jimmy Carter, the Worst.President.Ever is now the Ambassador to Hamas. Think about this. This is insane. He is a Hamas mouthpiece. Outrageous!

He gave a speech on behalf of Hamas. Some video of Carter's speech can be seen here.

His actions shouldn't surprise us, really - he's been relegated to obscurity since his disastrous landslide loss to Ronald Regan - yet he returns from time to time acting on behalf of Terrorist Sympathizers and America-bashers. Another angry, bitter Democrat. Who could have known...who could have known?

If the next president is a Democrat, boy it sure would be nice to see reports of George W. Bush and George H.W. Bush on foreign soil giving speeches about how terrible the U.S. is under the current Democrat Administration. But no Republican ever does this, they have too much class.

Consistency is only possitive when you don't suck...er...

Funny how ignorance has a tendency to skew history for it's own agenda. The man has won the Nobel Peace Prize. The disaster of his presidency came from impatient Americans and an enormous inherited mess, neither of which were his fault.

Funny how ignorance has a tendency to skew history for a Liberal/Progressive.

Adolf Hitler was nominated for the Nobel Peace Prize. So was Stalin and Mussolini.

Carter is entirely responsible for his disastrous term, no one else.

Nice attempt on your part to split hairs. Too bad I'm far smarter than are you.

Take your foolishness to a blog where someone might give a shit about what you believe.