Regular readers know that I've christened as Ted Kennedy's Poodle. But perhaps there is a better name.

Everyone has seen the below image, mostly reproduced at Liberal and Progressive web sites and blogs, comparing President George W. Bush to a chimp. Oh, those Libs, they are so funny and so clever, aren't they? 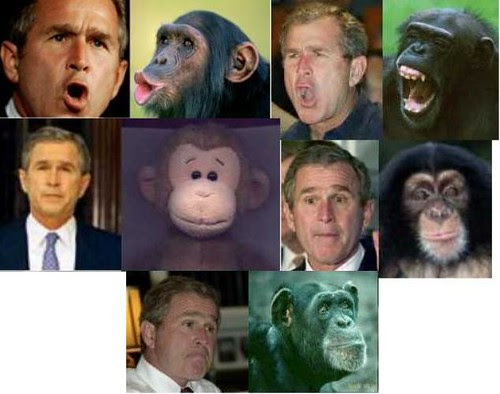 But it's Ted Kennedy's Poodle that really resembles a chimp. Often while watching television and The Poodle appears on some program, I mistake him for Whiplash, the Taco Bell monkey.

Anyways, I used the same format as the above Bush-chimp comparison, so decide for yourselves who looks more like a monkey; Bush or Ted Kennedy's Poodle. 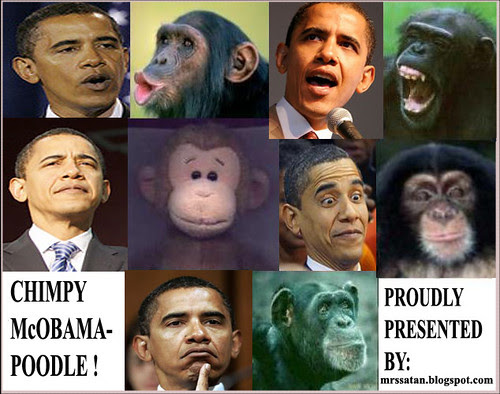 Comments:
Don't bother submitting a comment crying "racist" or "bigot" - it won't be published - because I am neither of those things.

If you can't take what you've been dishing out - and I'm directing that statement to the Liberals, Progressives and Haters and their actions over the past seven years - then perhaps you need to rethink your low-life political tactics.

You are skating on the thinnest ice. With that said, it is funny!

I know you. The last thing you are is racist.

It's the ears. It's all in the ears DD. So now do we have a chimpoodle or a poodlepanze?

Hey maybe you'll get another one of those Bush lied rants. I love those. They make me smile.

Mike, thanks. Appreciate your input and support. I'm just turning the same shit Liberals have used right back on 'em. Glad you're still reading and commenting here.

Chimpoodle/Poodlepanze? Bwa!!! You are so creative. I never even thought of those words. Riotous!!

re: Bush Rants. Oh good Christ, you have no idea how many Anonymous comments get submitted that never see the light of day. I get the long list of Republican so-called sex offenders (I say so-called because half of the names are the most local, local allegedly Repub politicians that no one has ever heard of and who knows if what is said about them is true) submitted a couple of times per week. I instantly recognize the opening few words, check the delete comment box and it is gone.

The others are anonymous comments that Bush lied, the war is for oil, blahfuckingblahfuckngsameoldshit.

They get deleted and I never publish them. The LefTards are so deranged. Maybe we should be investing in Tin Foil Futures?!?!
Hey, now THERE's an idea!

Beautiful pics at Hiking CO. Kudos. HAve you ever thought of submitting your photos to, or selling them for profit? They would make great photos for anything, but the first thing that popped into my mind was for calendars. Christ, your photos trump the same old tired photos I've seen on caldendars for the past 20 years.

As always, great to hear from you.

Thanks DD. Glad you like the photos. I am strictly amateur, but occasionally I get one right. None of the equipment I use is of proshooter caliber and if it was, I wouldn't know how to use it anyway. Would I like to get paid walking around the woods taking pretty pictures? I think I would, but I don't know how. Plus, I am too lazy and too broke to go to school to learn a new profession. There really is lot to learn to know how to use a camera properly. You should see the quality of the photos on summitpost.org; one of my favorite websites for all things mountainous. I on the other hand just point, shoot, and pray. Thanks to digital cameras it's now point, shoot, and delete.

Well, I sure think the photos you take look professional. You should shop some of them around and see what happens. I think they vistas you shoot are perfect for calendars. You've amassed such a selection of them representing all the seasons too.

I have to get me a digi camera one of these days and play with it. Money is the current issue - rather, a lack of it.