Oh, this is a funny one! A veritable knee-slapper and then some! 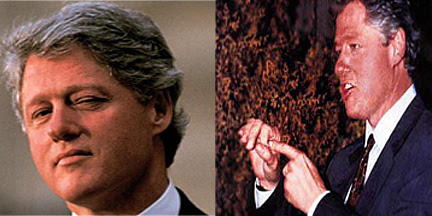 The Bill Clinton who met privately with California's superdelegates at last weekend's state convention was a far cry from the congenial former president who afterward publicly urged fellow Democrats to "chill out" over the race between his wife, Hillary Rodham Clinton, and Barack Obama.

In fact, before his speech Clinton had one of his famous meltdowns Sunday, blasting away at former presidential contender Bill Richardson for having endorsed Obama, the media and the entire nomination process.

"It was one of the worst political meetings I have ever attended," one superdelegate said.

According to those at the meeting, Clinton - who flew in from Chicago with bags under his eyes [Maybe sleep deprived from being up all night snorting booger sugar? - Drake] - was classic old Bill at first, charming and making small talk with the 15 or so delegates who gathered in a room behind the convention stage.

But as the group moved together for the perfunctory photo, Rachel Binah, a former Richardson delegate who now supports Hillary Clinton, told Bill how "sorry" she was to have heard former Clinton campaign manager James Carville call Richardson a "Judas" for backing Obama.

It was as if someone pulled the pin from a grenade.

"Five times to my face (Richardson) said that he would never do that," a red-faced, finger-pointing Clinton erupted.

The former president then went on a tirade that ran from the media's unfair treatment of Hillary to questions about the fairness of the votes in state caucuses that voted for Obama. It ended with him asking delegates to imagine what the reaction would be if Obama was trailing by just 1 percent and people were telling him to drop out.

"It was very, very intense," said one attendee. "Not at all like the Bill of earlier campaigns."