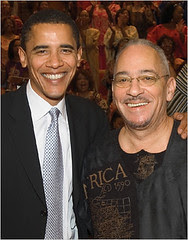 (Left/Right): Senator Barack Obama with the Rev. Jeremiah A. Wright Jr. in a 2005 photograph.

Oooooooh, this one is going to be mighty difficult for Ted Kennedy's Poodle to spin himself out of.

Obama's Pastor, the man who performed the wedding ceremony for the Obamas, Rev. Jeremiah Wright of the Trinity United Church of Christ is on record preaching the following statements. ABC News:

Rev. Jeremiah Wright, Obama's pastor for the last 20 years at the Trinity United Church of Christ

In addition to damning America, he told his congregation on the Sunday after Sept. 11, 2001 that the United States had brought on al Qaeda's attacks because of its own terrorism.

"We bombed Hiroshima, we bombed Nagasaki, and we nuked far more than the thousands in New York and the Pentagon, and we never batted an eye," Rev. Wright said in a sermon on Sept. 16, 2001.

"We have supported state terrorism against the Palestinians and black South Africans, and now we are indignant because the stuff we have done overseas is now brought right back to our own front yards. America's chickens are coming home to roost," he told his congregation.

It's once again amazing how the Left is willing to overlook statements that are so similar to someone who was often a target of their wrath - the late Rev. Jerry Falwell - when it comes to a Liberal saying the same thing. Oh, how quickly the Left forgets and how selective - wait, I mean their hypocrisy.

Obama's response, so far, is that he refers to Rev. Wright, "is like an old uncle who says things I don’t always agree with.” Well, perhaps, but how many of us have an old uncle as our main spiritual adviser while we're running for president of the country of which our uncle is so filled with hatred? The question Obama is skirting around is how can he justify embracing someone as his pastor and adviser, someone who is so full of rage and anger directed at his own country.

Comments:
The photo at the top of this post says it all. It's kind of hard for the poodle to deny his association with his little church of hate. He may get a pass from his cult followers, but too many know the truth. The poodle is a fraud.

Wright is a racist through and through. And The Poodle has been a member of that church for 20+ years?

Oh dear god how the situation would be portrayed by the MSM and the politicians if it were John McCain and his pastor. Oh jeebus, how the Left would be screaming.