A former aide to ex-(New Jersey) Governor DemocRAT Jim McGreevey claims he had sexual trysts with McGreevey and his now-estranged wife while they dated before the governor took office. AP:

McGreevey's former driver and traveling aide disputes claims by Dina Matos McGreevey that she did not know about her husband's homosexuality when she married him in October 2000.

Pedersen, 29, told the newspapers that the threesomes started in 1999 while McGreevey was mayor of Woodbridge and McGreevey and Dina were dating. He said they stopped when McGreevey was elected governor in 2001.

He said he only had contact with Matos McGreevey during the trysts, and wasn't sure whether McGreevey was gay.

"In hindsight, there might have been light interest (in me)," Pedersen told the Newark newspaper, "but it didn't seem like he was gay. It did enhance their sexual relationship having me be a part of it."

Ahem..."in hindsight." Make up your own jokes, people.

Why, I bet Jim McGreevey was quite turned on at the sight of another man involved in his little escapades, if what Pederson says is true.

The ex-Mrs. McGreevey denies the allegations.

You remember McCreepy, don't you? He was the guy seeking love, romance and sex with men in such wholesome and decent places such as truck stops and gay bookstores. After he got his groove on with any number of men at those locations, he'd return home to the Governor's Mansion and his wife and children. Ahhhhh, Love in the Afternoon Democrat Style. So wholesome, so Family Value-oriented.

If Pederson is now 29-years old, that puts him around 19 or 20 years of age in 1999. Jim McCreepy - now 50 - was born in 1957. Gee, McCreepy likes 'em young. As soon as they graduate high school Jim is on the prowl for some "chicken." Well, at least he waits until they are of legal age - as far as we know - unlike Democrat pederast poster boy the late Gerry Studds. 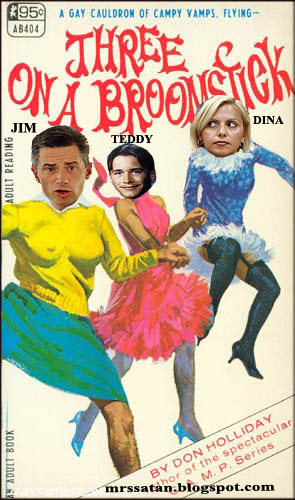 Comments:
Is that some nip action I see going on with McMangravy's right titty? Why that saucy bag.

So who was the bitch and who was butch in the "gay cauldron of campy vamps"? I see it only costs 95 cents to find out though I can safely say I don't want to know about the "flying" part.

You know this post just reminded me of the line from the Mentors song "Sandwich of Love" which goes...

"Sandwich of love. One below and one above."

OK. I got to stop this now.

"But it didn't seem like he was gay"? I mean, just because a dude blows another dude and wants a meat missile in his chute doesn't make him gay, does it?

What? It does make him gay? Oh. Well, in that case, McCreepy is gayer than Liberace with a Village People poster.

Molson - HA, there is some hardening of the nip. And I didn't even photoshop that into the image, it was there on the original when I found it. Heh - you notice everything! Great eyes!

Jonathan - McGreevey does outgay Liberace, doesn't he? At least Liberace punched a guy out for asking him if he was gay many decades ago, so we know Lib knew how to throw a punch. I doubt McCreepy could do the same.