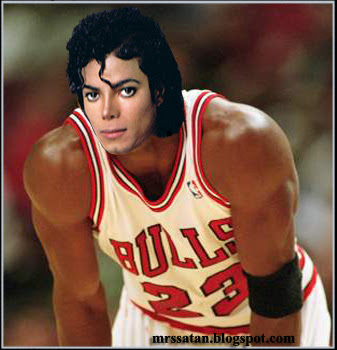 McCain, 71, insisted during an official visit in Amman Tuesday that members of Al-Qaeda in Iraq were slipping into neighboring Iran and receiving training there before returning to the war-torn country to wreak havoc.

McCain made the gaffe right in the middle of an official visit in the Middle East that was supposed to highlight his knowledge in foreign affairs.

"It's common knowledge and has been reported in the media that Al-Qaeda is going back into Iran and receiving training and are coming back into Iraq. That's well known," the Vietnam war veteran said.

BFD. So what? Is this the best criticism that the Dems can throw against Senator McCain? It appears so.

Speaking at a D.C. function, Vice President Al Gore, wowed by the Bulls, said: "I tell you that Michael Jackson is unbelievable, isn't he. He's just unbelievable." - ( Source: The Chicago Tribune June 17, 1998 )

Yes, Albert, that Michael Jackson sure is an unbelievable NBA All-Star. A phenomenal one at that. If Albert can't tell Michael Jordan from Michael Jackson...well, maybe black people do look all the same to him.

Does anyone recall the Dems desperately spinning for DemocRAT John Kerry (I think I heard he served in Vietnam - - - is that true?) on his famous and denigrating "botched joke", "You know, education, if you make the most of it, if you study hard and you do your homework, and you make an effort to be smart, uh, you can do well. If you don't , you get stuck in Iraq."

This site has a rich collection of Gore-isms, where the "smartest man evah" makes on verbal faux pas after another after another. You want gaffes that deserve ridicule? Al Gore, Junior, is the master of misspeaking. You may recall some of his greatest gaffes:

"A zebra does not change its spots." - Al Gore, attacking President George Bush in 1992.

"Who ARE these people?" - Gore asking who the busts of our Founding Fathers are at Monticello before the Inauguration.

In the spring 1998 - Gore called The Washington Post's executive editor to tip him off on an ''error'' in the paper. ''I decided I just had to call because you've printed a picture of the Earth upside down on the front page of the paper,'' Gore said. (Source: Florida Times Union 4/3/98 ). There is no ''up'' in space; only on maps that orient the Earth's surface north and south.

"During my service in the United States Congress, I took the initiative in creating the Internet." - During an interview with Wolf Blitzer on CNN on March 9, 1999.

Yeah, you Dems have such a clean track record of your own politicians never misspeaking.

Comments:
Spit on the keyboard alert with Jackson wearing Bulls uniform # 23, dude! funny as all get out!

Sorry about your keyboard!

I don't necessarily agree with your politics, but this: "the Democrats have latched onto this like Heath Ledger latching onto prescription drugs."

Is the best shit EVER.

It's fair that we can disagree on politics and be civil about it. I have no problem with that. It's when civil disagreement gets ugly that I don't like, and both side can be guilty of that, though I think the Left is more nasty at that sort of thing than is the Right.

I'm an Independent first, a small "L" Libertarian second and a Republican third. The Right has their share of problems, no doubt about it. I wish the Left would give me some real options to support them - something that doesn't include "tax and spend" as an answer for every problem.

My first objective in anything is humor - sometimes "dark" humor - but humor none the less. I am pleased you recognize it and hopefully get a kick out of it.

Thanks for your kind words.

Google up how many Repugs have latched onto '57 States' and even tried to make it sinister.

It's been a long time since I broke my own policy of rarely publishing an ANONY comment. Even if a comment agrees with me and is ANONY do I rarely publish it.

But I published yours for no other reason than to call you names and attack you.

"Repugs" -? What is that? Did you invent that term when you crawled out from under your rock?

Obama is a liar, but you're AOK with lies, aren't ya? You'd let Obama poop in your mouth and you'd ask for more saying "that tastes great!"

You don't care about issues or the truth, do you? You just love Marxism. I'd have no problem with that if you'd just admit you love Marxism, but you never will, will you? You're kind is all the same.

You're just an idea-less, mindless, Obamabot who will never admit that your Messiah is a fraud.

Now, crawl back under your rock where you belong.