www.justforeignpolicy.org
Is Just A Bunch Of Lies

Have you seen the below image plastered all over Liberal and Progressive blogs from justforeignpolicy.com that alleges it accurately counts and tracks the number of Iraqi deaths due to U.S. Invasion? 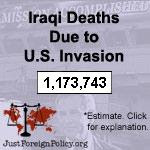 The above figure is a lie.


It is an updating clock, meaning it continually changes as the number of deaths increase. Talk about blood-lust and vampiristic tendencies.

Notice the wording as well, "Iraqi Deaths Due To U.S Invasion." Invasion? Is "invasion" their new euphemism for "occupation"?

This is what they say about their body count tally in what is nothing more than an attempt to legitimize the number of dead by citing the Lancet Study:

The number is shocking and sobering.

It is at least 10 times greater than most estimates cited in the US media, yet it is based on a scientific study of violent Iraqi deaths caused by the U.S.-led invasion of March 2003.

That study, published in prestigious medical journal The Lancet, estimated that over 600,000 Iraqis had been killed as a result of the invasion as of July 2006. Iraqis have continued to be killed since then. The graphic above provides a rough daily update of this number based on a rate of increase derived from the Iraq Body Count.

We learned this past January that the Lancet Study estimate of Iraqi deaths is bogus.

The Lancet study was, in part, funded by Liberal Sugar Daddy György Schwartz, better known as billionaire George Soros, a Liberal activist whose well-known sympathy for terrorists and whose love of Socialism and Marxism, and whose hatred of the United States and our Allies, knows no boundaries.

In another appearance of self-contradiction and conflict, justforeignpolicy.com cites, their number of Iraqi deaths "this number based on a rate of increase derived from the Iraq Body Count." Perhaps justforeignpolicy should release their mathematical calculations on how they arrive at their number of 1,173,743 because in January, the number of Iraqi deaths estimated by Iraq Body Count was between 80,381 - 87,792.

justforeigpolicy not only begs you to donate your hard-earned money, they ask you to...

Fight attempts to minimize Iraqi suffering and remind visitors to your site of the awful human costs of continued war.

Here's an idea. Instead of vastly over-inflating the number of deaths, perhaps justforeignpolicy could consider being honest with their readers and attempt to accurately report on this subject. But then this wouldn't fit with their Liberal-Progressive rhetoric and their Terrorist-friendly propaganda now, would it?

If the number of Iraqi deaths is so horrific and egregious to the Lefties, then I once again have to ask - as I have done many times - why they were so silent when Iraqis were dying due to embargoes and sanctions imposed during the Clinton Administration. 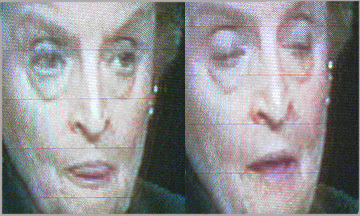 It was on May 12, 1996, on the television program "60 Minutes" with reporter Leslie Stahl, asking then-Secretary of State Madeleine Albright the following question, and Albright's response:

Stahl: "We have heard that a half million children have died. I mean, that's more children than died in Hiroshima. And, you know, is the price worth it?"

Albright: "I think this is a very hard choice, but the price--we think the price is worth it."

If the number of deaths was "worth it" under the Clinton Administration's policies, then why is it different now? The answer is always the same, it never changes: the only thing that matters to Liberals and Progressives is furthering and advancing their political ideology of Liberalism, Progressivism, Socialism and Marxism. The difference why the number of deaths is now so important to Liberals and Progressives is that George W. Bush is a Republican. If he were a Democrat, you wouldn't be hearing any of this talk from groups such as justforeignpolicy and others like them.

This issue is nothing more than the Left wanting to advance their political stranglehold by exploiting whatever they can for their own gain. Exploiting and over-inflating the number of dead is simply another play from their staid deck of cards.

Also in January, a far more reputable and accurate study of the number of Iraqis killed put the number of deaths at 151,000. BBC:

One of the biggest surveys so far of Iraqis who have died violently since the US-led invasion of 2003 has put the figure at about 151,000.

This is about a quarter of the figure given in a disputed Lancet article, but nearly three times higher than that of the Iraq Body Count campaigning group.

Whatever it takes to erroneously hype the number of dead to serve what is nothing more than the vested political interests of furthering Liberalism Socialism and Marxism, right Dems?

At the bottom of their home page, justforeignpolicy says the following about their organization:

Just Foreign Policy is an independent and non-partisan membership organization. We are dedicated to reforming U.S. foreign policy to serve the interests and reflect the values of the broad majority of Americans, rather than those of special interests both inside and outside of government.

Uh huh. They forgot to add that they love us and that the check is in the mail. 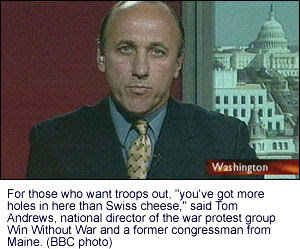 Tom Andrews is the National Director of justforeignpolicy. Who is Tom Andrews?

He is a Democrat from Maine and the LEADER of "Win Without War," who served in the Maine State House of Representatives from 1983-1985 and State Senate from 1985-1990.

He then ran and served in the U.S. House of Representatives from 1991 - 1995. He also is a contributor to The HuffPuffPoo.

In other words, Mr. Andrews has never really held a real job, he's spent almost his lifetime sucking the teat of, and feeding from, the government trough.

Two other names leap off the page of justforeignpolicy's Board Members:

Justforeignpolicy thinks they can be objective about the number of Iraqi dead with people like Andrews, Bond and Hayden on their Board? Don't make us laugh. .

You can throw away the word "trust" in the saying "trust but verify" when it comes to anything reported by Liberal group like justforeignpolicy.org. One can NEVER trust Liberals or Progressives. Trust only in what you can verify with your own eyes. Don't take my word on this either, which is something I have always advocated. Verify for yourself.

Open your eyes and minds to the lies that you are being told by Liberals and Progressives. When you begin questioning them, and they respond with incredulity - along the lines of "how dare you question us" - you will know you have struck a nerve with them and that their defensive posturing is indicative that they cannot substantiate their rhetoric and falsehoods with facts.

Comments:
Why can't the leftards and the facts just get along? Oh and no political movement has resulted in the murders of more people world wide than socialism and that is a fact that the Poodle can put in his crack pipe and smoke it.

Once again DD, an excellent post fragging leftards with facts. They absolutely hate it.

Thank you for your encouragement and support Molson. Facts and Libs never get along well with each other,do they? Facts force the Libs to confont they "believe" - and it's hard to redconile those things for the LefTards. You are spot on.