Ted Kennedy's Poodle is being accused of plagiarism from the Hillary Clinton campaign for using virtually the same exact words as Massachusetts Governor Deval Patrick gave in a speech on October 15, 2006 on his campaign trail.

In a speech on Oct. 15, 2006, then-candidate Patrick responded to accusations that he was uttering hollow words by saying: 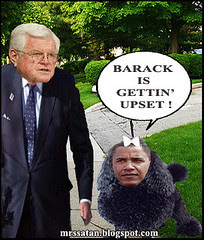 It is amazingly amusing in a rich, chocolaty, nougaty sweet way that Democrats are suddenly offended by campaign tactics used by their own party - in this case the Clinton campaign, tactics that the Democrats have been shamelessly using for years against their Republican opponents - when these tactics are turned on a fellow Democrat, in this case The Chosen One: Ted Kennedy's Poodle.

We are witnessing the Democrats yanking their head out of their ostrich hole because their tactics are now internally affecting and negatively portraying one of their own.

Welcome Dems, to a taste of your own medicine self-injected right into your own political party, not by a Republican, but by one of your very own politicians. You don't like it much? Gee, that's too bad. I'm fresh out of sympathy for you.

You don't think the Dems would overlook or let an opportunity like this go by if it this happened to a Republican, do you?

Comments:
Wow! 2 references to the Dems yanking their heads out of ostrichs holes. Are you watching Nature on PBS?

Repitition is sometimes the key to fine writing Modesto.

Modesto, repitition is sometimes the key to fine writing.

Sometimes, Modesto, the key to fine writing is repitition.

Modesto, next time I see you I'm gonna pinch your nipples so long and hard they'll turn purple. I know you'll like it and beg for more.

its so clear Obama stole his words from Gov. Patrick. the two are almost word for word identical. whats it going to take for the democommies to wake up to this guy?

I agree with you Charles. But always remember the Democommies amazing ability to use selective judgment in the object of their criticism. They have it down to a science.

Thanks for visiting and commmenting.