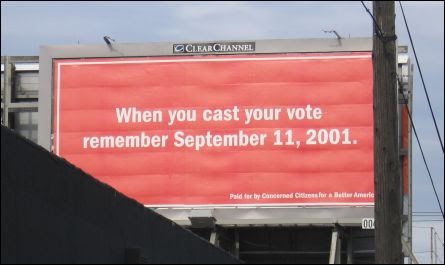 From the Seattle PI:

The billboard, which faces south from the corner of Western Avenue and Denny Way, states that it was funded by something called "Concerned Citizens for a Better America."

You won't find the group's name on Google, except in a wayward comment thread or two. The group is not registered as a Political Action Committee or with the Washington Secretary of State's corporation division. Nor does it have to be -- based on this billboard, anyway -- because its message neither mentions a candidate by name nor appears too close to election time.

Liberals and Progressives will have a field day with this story. "How dare any group exercise their rights under the First Amendment with a message like that of the billboard," they'll say. Don't bet my take on this will be too far from the truth, either.