A top government official is accused of sexually soliciting and assaulting an underage boy.

And it sure is funny that we haven't heard this being discussed on Liberal Radio by Fat Ed Schultz, Skanky Miller, The Rapidly Decaying Corpse, Thommmmmmmmm Hartmannnnnnnnnn, Ratty Rhodes or even the most prissy and sissified Jon Elliot. Oh, they spent countless minutes and countless hours of their programs devoted to talking - smearing and lying, actually - about Craig and Foley. But they aren't talking about this case.

That's because when child molesters are Democrats they get a free pass from their Media Liberals. Nice double standard these folks all have - yes?

Newsbusters has the story:

A top official in Gov. Deval Patrick's administration is accused of sexually assaulting a boy in the steam room of a Florida resort and has been placed on unpaid leave... Carl Stanley McGee, the assistant secretary for policy and planning, was arrested Dec. 28 after the suspected assault at the Gasparilla Inn and Club in Boca Grande, according to the Lee County Sheriff's Office.

The AP story goes on to tell us that McGee met the boy at a resort at which they were both staying, how he chatted the underaged boy up one day and met him for oral sex in the resort's steam bath facility the next.

The AP even lets us all know that McGee "made $115,000 as a state employee," and that he "worked at Boston law firms before joining the administration."

We even get this bit of salacious detail from the AP story:

His marriage to John Finley IV in November 2005 was featured in The New York Times' Vows column.

So, this well-publicized homosexual, state employee gets all his relevant data revealed by the AP in their story. Well... maybe not. You see, there is one little descriptive word that the AP seems to have forgotten in their avalanche of McGee's resume.

And that word is DEMOCRAT.

Yes, I know its [sic] shocking, but the AP seems to have forgotten to mention that Carl Stanley McGee is a Democrat.

Trans World News reports the following on the McGee story: 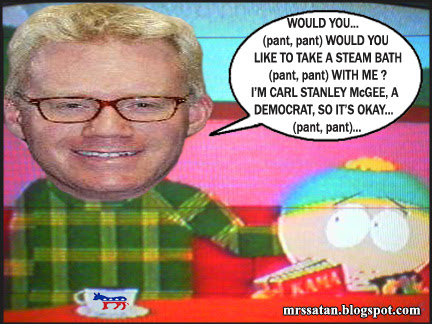 And Lifesite.Net reports this about the McGee story:

[McGee],the 38-year-old homosexual activist made headlines in 2005 when he contracted a high-profile homosexual "marriage" with his partner, Rev. John H. Finley.

Wait a second here...whoa, whoa, whoa. One reason gay people tell us they want to get married is so things like the above won't happen. Huh...huh...interesting. I guess being gay and being married doesn't diminish perverts from committing acts of sexual aggression toward minors. Who knew, who knew?

GLAAD got their speedos all in a bundle last year when Jerry Lewis, hosting the Annual Muscular Dystrophy Labor Day Telethon, uttered the word "faggot." Lewis issued an apology. But GLAAD has nothing to say at their web site and - as far as I can tell - hasn't bothered to issue any press release condemning the actions of McGee.

Nope. There's no hypocrisy or double standard from the Left, the Gay Left, the MSM or any other Left-of-Center organization about homosexuality. Unless, of course, your name is Larry Craig or Mark Foley and you happen to be a Republican.