It appears that ethanol is not the panacea that its advocates seem to believe. In fact, the study - published in Science magazine - shows ethanol may contribute to so-called global warming. Yikes! Scary!

The widespread use of ethanol from corn could result in nearly twice the greenhouse gas emissions as the gasoline it would replace because of expected land-use changes, researchers concluded Thursday. The study challenges the rush to biofuels as a response to global warming.

The researchers said that past studies showing the benefits of ethanol in combating climate change have not taken into account almost certain changes in land use worldwide if ethanol from corn — and in the future from other feedstocks such as switchgrass — become a prized commodity.

The researchers said that farmers under economic pressure to produce biofuels will increasingly "plow up more forest or grasslands," releasing much of the carbon formerly stored in plants and soils through decomposition or fires. Globally, more grasslands and forests will be converted to growing the crops to replace the loss of grains when U.S. farmers convert land to biofuels, the study said.

The Renewable Fuels Association, which represents ethanol producers, called the researchers' view of land-use changes "simplistic" and said the study "fails to put the issue in context."

You have to love someone like Bob Dinneen, don't you? A study conducted by several independent organizations - and I'll list them in a moment - is published that is critical of his pet baby and what does he do? Why, he adopts a denial syndrome, one that he would be critical of and accuse those who don't believe in so-called global warming. Oh this is rich; creamy, chocolaty, nougaty, rich hypocrisy on the part of Dinneen, isn't it?

Back to the AP story:

The study released Thursday by researchers affiliated with Princeton University and a number of other institutions maintains that these analyses "were one-sided" and counted the carbon benefits of using land for biofuels but not the carbon costs of diverting land from its existing uses.

"The other studies missed a key factor that everyone agrees should have been included, the land use changes that actually are going to increase greenhouse gas emissions," said Tim Searchinger, a research scholar at Princeton University's Woodrow Wilson School of Public and International Affairs and lead author of the study.

The study said that after taking into account expected worldwide land-use changes, corn-based ethanol, instead of reducing greenhouse gases by 20 percent, will increases it by 93 percent compared to using gasoline over a 30-year period. Biofuels from switchgrass, if they replace croplands and other carbon-absorbing lands, would result in 50 percent more greenhouse gas emissions, the researchers concluded.

The study included co-authors affiliated with Iowa State University, the Woods Hole Research Center and the Agricultural Conservation Economics. It was supported in part indirectly by a grants [sic] from NASA's Terrestrial Ecology Program, and by the William and Flora Hewlett Foundation. Searchinger, in addition to his affiliation with Princeton, is a fellow at the Washington-based German Marshall Fund of the United States.

"Some opportunities remain to produce environmentally beneficial biofuels" while "unsound biofuel policies could sacrifice tens of hundreds of million of acres" of grasslands and forests while increasing global warming, said the scientists, including four members of the National Academy of Sciences. 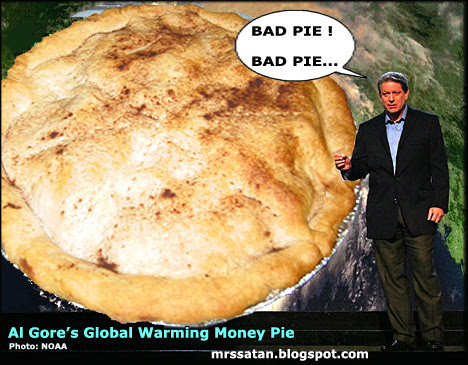 Those who profit financially from hyping so-called global warming, people like Dinneen and Albert Gore, Junior, ask that we accept - without question or skepticism - their studies that the temperature of earth is warming solely due to human activity.

We are asked to blindly accept that so-called global warming is because we drive SUVs, use oil and its by-products, use patio heaters and light our homes with incandescent bulbs. This is perhaps the biggest hoax ever perpetrated on the world public. The planet Mars is experiencing the same slight warming trend that is occurring on earth. It must be all those SUVs the Martians are driving.

Over 400 scientists are on record in their disagreement that humans are the cause of so-called global warming. Gore refuses to debate them - he won't debate even one of them. There is no consensus in the scientific community that the earth is warming because of humans.

The so-called global warming movement is about money and control by organizations like the United Nations and other groups of Alarmists who seek to suppress countries like the U.S., the UK, Western Europe and the Far West in order to "equalize" prosperous countries with those of far lesser developed countries. Well, this is how the Liberal Mentality always acts; instead of helping to advance those falling behind they instead want to hinder and restrict those who achieve. Typical, typical rank Liberalism.

We are asked to trust the words from the Chicken Little The Sky Is Falling Crowd and not doubt them, much to our own individual and global financial detriment and disadvantage. If you trust and believe in what you are hearing from the Global Warming Alarmists, you are not doing your due diligence in seeking the real truth about this issue. You will be burdening your children and grandchildren with a ominous millstone from which they will never recover.