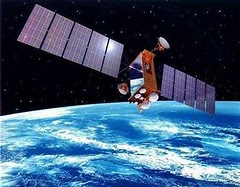 The scary satellite Democrats fear might listen in on their phone calls to Auntie Martha
The key difference between the version of the FISA Bill set to expire at midnight, Saturday - the version favored by the Bush Administration and real Patriots - compared to the FISA law favored by the weak and terrorist-friendly Democrats, is noted in the
news story "Bush Says Congress Putting U.S. in Danger", via My Way News:

To get a court order, intelligence agents have to prove they have "probable cause" to believe a target is foreign agent or terrorist before being allowed to tap a line inside the United States, even if the communication originates and ends in a foreign country.

It is difficult for intelligence agents piecing together shreds of information to get enough to merit probable cause, he said. By the time they can amass enough information to do that, the phone number they wanted to track might already be obsolete, said [Director of National Intelligence Mike McConnell].

This isn't the old days when you dialed a rotary phone or had Sarah in Hooterville connect you to the phone number K7-802 in Pixley. This is, however, where the mindset of Democrats is, back in the old days of communication technology. 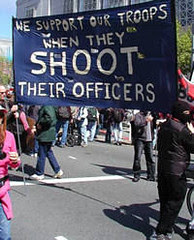 Democrats support the troops, just not the war. The picture says it all, doesn't it?
Has the U.S. experienced another terrorist attack since September 11, 2001? No. Huh - something must be working then, in order to have prevented this. The Democrats are content to float along on a wish and a dream - like the country did for eight years under the Clinton Administration - by crossing their fingers hoping we aren't hit again. 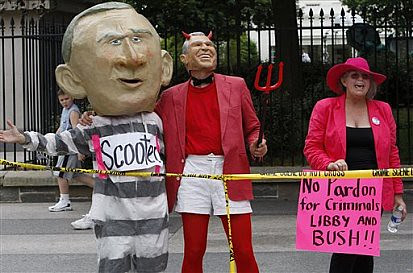 But even more importantly and significantly, Democrats want the U.S. to experience another domestic terrorist attack so that can say, "see, Bush's policies haven't kept us safe." Democrats believe another attack will help them politically. 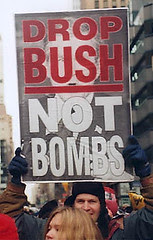 A great bunch of folks these Pacifistic Democrat are, huh? In future columns, I will be referring to them as Demoterrorists.

Comments:
check out my link to Shelby Steeles take on this bullshit attitude by the leftards. Oh, I'm back, not writing so much as dot connecting. Mohammed images soon, a stack of drawings someone handed me with an appeal to put them up on-line. I smell a 'Draw Mohammed' contest coming up....

ooooh, Draw Mo...that sounds good. And risky too! Go for it. Let me know when you start. I'll link to it and contribute if my creative juices are flowing.

I swear my hand to god I'm gonna call you this week and hook up with ya.

Maybe the Dems are worried about eavesdropping because their bribes and corruption will be exposed? I remember some poor, downtrodden Chinese workers donating thousands to Hirrary Crinton's campaign last year.

Yes Don, like the dishwashers who donated thousands of dollars to Hirrary on a hour pay scale of less than min wage. How do they do it?!? Those Chinese are so resourceful.

You know, I like Chinese.
They only come up to your knees.
And they are always ready and eager to please.