It's going to be fun watching The Left writhe in agony, twisting in anger when Hillary Clinton - supported by the Superdelegates - steals the Democrat nomination from Ted Kennedy's Poodle.

If you think Hillary Clinton won't be the Democrat candidate for president you are living in the wonderful world of Liberal Lunacy.

Do not - not by any means - consider Hillary Clinton out of the race, "finished" or ready to concede to Ted Kennedy's Poodle.

The major obstacle within the Democrat party is the issue of the Superdelegates. CS Monitor:

"There is an anger among a substantial element of the party who feel these unpledged delegates are somehow undemocratic, and if the primary result is overturned, the results are somehow illegitimate," says Stuart Rothenberg, an independent political analyst in Washington. "This is a major problem for the Democrats."

As of Tuesday, 242 superdelegates have endorsed Clinton and 160 have picked Obama, according to the Associated Press.

"Our nominee must be chosen by Democratic voters, not by backroom deals of the party elite," says Charles Chamberlain, political director for Democracy for America[.]

When the rank and file voice of Democrat voters and supporters is ignored - and it will be - and the Superdelegates kowtow to, and nominate, Hillary Clinton over populist Poodle, the rank and file will be out-of-their-minds-mad apoplectic.

The Dems are going to scream louder than they've ever screamed before.

And when this happens, and it will, the rest of us are going to be laughing like hell.

I'd like to introduce "Baby Democrat." We'll be hearing much more from Baby Dem in the future. What Baby Dem is saying - crying, actually - below is how the Dems will be feeling when their popular vote for The Poodle is overlooked and Hillary is instead "chosen" by the Superdelegates as the Democrat Candidate. You don't think it will pan out this way? Stay tuned. 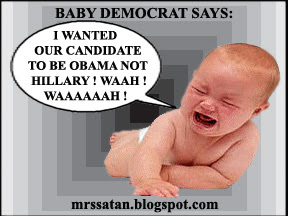 Comments:
You should attach a crying baby sound to that picture. Maybe include Andy Griffith whistling in the background.

you're such a beeatch, Modesto.