Clintons Pimp-Out Chelsea, Then Get
Angry When It's Called For What It Is

Because it's funny when Liberals implode.


MrsSatan and the unregistered sexual predator/offender are angry at MSNBC's David Shuster for saying the "Clinton campaign had pimped-out Chelsea." The story, from the Associated Press:

In a conference call with reporters, Clinton communications director Howard Wolfson on Friday excoriated MSNBC's David Shuster for suggesting the Clinton campaign had "pimped out" 27-year old Chelsea by having her place phone calls to Democratic Party superdelegates on her mother's behalf. Wolfson called the comment "beneath contempt" and disgusting.

"I, at this point, can't envision a scenario where we would continue to engage in debates on that network," he added.

MSNBC said Shuster, who apologized on the air for his comment, has been temporarily suspended from appearing on all NBC news broadcasts except to offer his apology.

"NBC News takes these matters seriously, and offers our sincere regrets to the Clintons for the remarks," MSNBC spokesman Jeremy Gaines said, adding the network was hopeful the debate would take place as planned.

Wolfson pointed to what he called a pattern of tasteless comments by MSNBC anchors about the Clinton campaign. Weeks ago, "Hardball" host Chris Matthews apologized to the former first lady after suggesting her political career had been made possible by her husband's philandering.

Shuster told The Associated Press he has tried to reach Clinton to apologize.

You know you've hit a nerve and the truth when Liberals scream and cry "foul." Shuster is exactly right, thus the Clinton's reaction sustains what Shuster said.

Look, Bubba and MrsSatan can't have it both ways. For a long time they said they wouldn't "use" Chelsea as a campaign tool or puppet. Of course they were lying. The moment Hillary's campaign lost a fraction of momentum, they pushed Chelsea onto the stage. 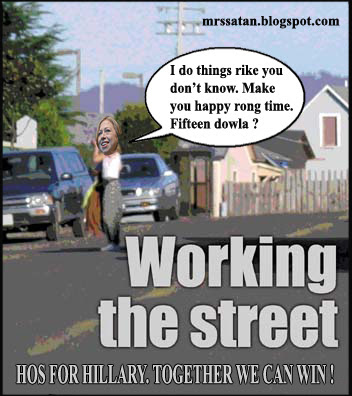 It's funny when Liberal karma used by deviants like the Clintons comes back and slaps them upside the head. How does it feel?

Hey Hillary, hey Bubba - "looks like you better put some ice on that."

Comments:
you are sick! sick! but damn funny. the image at the top of the story hilarious. Damn Dave, you should be getting paid to write this. keepup the good work.

BWWAAAAHAHAHAHAHAHAHAH! Oh this is just too damn funny. You just can't pay for entertainment this good. Oh how the Clintlers and the libertards have their panties all bunch in a knot over a comment by another libertard. Wait. BWWAAAAHAHAHAHAHA! Maybe someone should have told Shuster that it is only OK to trash the Bush girls. Then it would be no harm no foul and it's not that I think Shuster actually did trash Chelsea. He didn't. He was dead nuts right and as you like to say DD, that is why the Clintlers and libertards are so pissed.

Thanks Dude. I wish the hell I could get paid to do this. Take care man.

You bet, Molson. The reason the Clintons are crying like stuck pigs is because they know what Shuster said is right.

The Clinters (another great term from you) would sell or whore out their grandmother if it would get them a vote. They are the biggest frikkin hypocrites in the political arena of all time.

Take care Molson, always a treat to read your comemnts!