Chelsea Clinton broke Federal Election Campaign Law by being inside a New Haven, Connecticut polling place on Super Tuesday morning. This shouldn't surprise anyone. She's following in the footsteps of her corrupt parents. Who knows, Chelsea probably did this deliberately, sticking her toe in what could be called a "what can I do that's illegal to test how much I can get away with," routine. She'll probably run for president in the future, announcing her candidacy around the year 2015. Who knows what other illegal activities she will "test" by then.

See the below photo from the WTNH story? I added circles around Chelsea and the time. See that - it says 6:00 AM. She had no business being there. She is a political operative and the law required her to be 75 feet away from the polling place. But just like her parents, Chelsea disregards the law; she is above the law.

This might cause a headache for Sen. Hillary Clinton's campaign in Connecticut. It's Chelsea Clinton inside a New Haven polling place at 6:00 a.m.

So why might this be an issue? According to state law, candidates or a candidate's representative, such as someone wearing a sign, have to stay 75-feet away from polling places "on the day of any primary".

The daughter of the Democratic presidential candidate was delivering a box of coffee to poll workers and talking with a firefighter in New Haven. According to a News Channel 8 photographer who was there, when the moderator announced that the polls are open, Clinton immediately went outside.

The Clinton incident prompted an e-mail from the Secretary of the State's office to the New Haven Registrar of Voters, reminding them of the 75-foot law.

A statement from Clinton campaign spokesman Philippe Reines said, "A live TV interview being conducted by WTNH at the site delayed her departure until just after 6, at which point she immediately left the station."

The WTNH news crew says there was ample room for Clinton to leave the voting area during their live report.

"Any citizen can file a complaint with Election's Enforcement, and they are in charge of enforcing the election laws in our state," [Secretary of the State Susan] Bysiewicz said. "It's our job to advise people what the law is and we did do that early this morning."

The Left will say, well she was just delivering coffee.

I wonder if they would be as forgiving and overlook this law-breaking if it had been one of Mitt Romney's sons in a polling place instead of Chelsea Clinton? I rather doubt it.

The news crew said Chelsea had "ample room to leave the voting area." I'll believe the words of the news crew any day before I believe the daughter of two of the biggest political liars of all time.

I hope someone files a complaint with the Election Enforcement Office and the Connecticut Secretary of State Office. There has to be one Republican, Independent or Libertarian in Connecticut who is willing to file a complaint.

If this had been the son or daughter of a Republican, Lefty Talk Radio pinheads would be talking about this and only this. The heads of Chris Matthews and Keith Olberwiener would have exploded on the air.

You know damn well this would be an issue if the law-breaker had been the son or daughter of a Republican. If this had been the Bush daughters, the Left would be screaming and barking like the rabid foaming-at-the-mouth Moonbats from hell that they are. 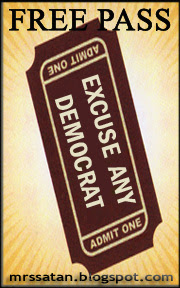 But Chelsea gets a Free Pass, just like her mom and dad.