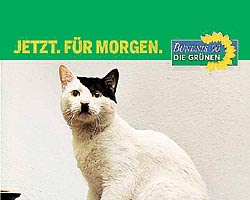 The German Green Party in Saxony and Hesse has an unusual poster for their municipal election campaign - an image of a cat that resembles Adolf Hitler with the tagline "you can't always recognize Nazis at first glance."

At the center of the elections, which took place Sunday, was a debate over the treatment of immigrants. The Green Party used the picture of the cat to condemn the extreme-right parties in Germany and their xenophobic policies.

The poster was released as public debate over the question of immigrants heated up following a series of violent attacks by young immigrants on older German citizens.

The use of the cat was bemoaned by the Web site www.catsthatlooklikehitler.com on the grounds that the Green Party used photo manipulation to produce their "Adolf Kitler" rather of one of the site's many authentic "Kitler" cats.