From Express and Star:

Pub patio heaters are set to be banned - because European MPs believe they are not environmentally friendly.

Smokers face being left in the cold and breweries with a bill for millions of pounds if the Euro MPs vote to ban the heaters.

They were today expected to back a resolution calling for a timetable to be drawn up for the heaters to be removed. The ruling could spell ruin for hundreds of pubs across the West Midlands and Staffordshire.

Euro MPs are set to debate the possible banning of patio heaters.

The debate follows pressure from Friends Of The Earth to ban heaters which claims patio heaters have a direct impact on climate change, wasting energy and causing environmental damage.

Friends Of The Earth says estimates by the Energy Saving Trust point to a standard patio heater emitting heat output of 12.5 kilowatts produces 34.8kg of C02 before the fuel runs out after 13 hours.

It calculates this is the equivalent to the energy required to produce 5,200 cups of tea or 400 cups for every hour of operation

Lib Dem MEP Fiona Hall has compiled a report on energy efficiency which "urges the Commission to establish timetables for the withdrawal from the market of all the least energy-efficient items of equipment, appliances and other energy-using products, such as patio heaters". 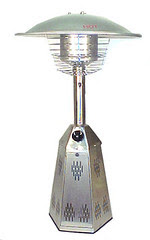 One type of patio heater
From All Headline News:

Because of its low energy efficiency, the European Union is considering banning patio heaters across the 27-member bloc. The EU Parliament is expected to pass a resolution on Wednesday that will put in place minimum benchmarks for energy efficiency on appliances including air-conditioning units, television decoder boxes and light bulbs.

If the resolution is approved, it may also result to the abolition of stand-by functions on electrical appliances.

Warning: Stop reading right now if use of the "F" word offends you.

I avoid using the "F" word on my blog most of the time. I will occasionally use it for emphasis or humor, but overall, I don't use it that much. This is not because I personally find it offensive, I do not. I prefer to write using language that excludes the "F" word rather than to simply ramble off on and issue or topic using the "F" word... 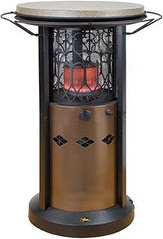 Another style of patio heater
You fucking global warming alarmists who piss your fucking pants at the slightest variance in temperature are motherfucking freaks. You are retarded fucking morons who are fucked in the brain. You're fucking insane and fucking mentally unstable. Your minds are fucking warped and diseased.

You fucking idiots base your theories of global warming on what is fucked up science. You believe this fucking science like it's some religious experience. It is not. We are exiting a fucking little ice age (and have been since the mid-1800s) and what follows a mini-ice age is a SLIGHT FUCKING WARMING TREND - and yet you cannot get this fact through your pin-headed fucking tiny brains. Countless scientists do not agree with you that humans are to blame for this SLIGHT TEMPERATURE INCREASE and have theories that discredit your fucking stupid, lame ass virally infected fucking theories that humans are responsible for what you so stupidly call "climate change."

"Friends of The Earth" my ass; a bunch of fucking greasy, smelly, unwashed fucking bunch of mental midgets of the grandest scale. Why don't you "Friends of the Earth" go out and literally fuck the earth. Go fuck the earth and find out how the earth responds. You are the most unproductive fucking people on the face of the fucking planet. Fucking die...just fucking die, already. Drop fucking dead and leave us alone.

Maybe you fuckheads have heard of the planet Mars? Mars is experiencing a warming trend similar to the earth. Are there fucking SUVs and fucking patio heaters on Mars? Not that we fucking know of. God fucking forbid there is a reason other than humans for the ever-so-slight fucking temperature increase on earth.

Jeebus H. Fucking Keeey-Rist Almighty, take these fucking global warming fucktards out to the back woods and shoot them dead. I am tired of listening to this false fucking rhetoric and false fucking science.

Comments:
Fucking 'a' right DD. There is no limit to the greentard's paranoia. Now it's patio heaters. Next it going to be barbecue grills. Then it will be string trimmers, lawn mowers, chain saws, fire places, etc, etc, etc. The greentards should stick to fucking goats. It is the only thing they are good at. The goats may not be too happy, but that is not my problem.

This is worth quoting:

"You fucking global warming alarmists who piss your fucking pants at the slightest variance in temperature are motherfucking freaks. You are retarded fucking morons who are fucked in the brain. You're fucking insane and fucking mentally unstable. Your minds are fucking warped and diseased." -- D.D.

Carbon levels in the atmosphere actually do have a correlation to temperature -- carbon levels lag by 800 years, which means CARBON EMISSIONS ARE NOT RESPONSIBLE FOR GLOBAL WARMING. Sun spots have a direct correlation to temperature, but this isn't mentioned because it would damage the socialists' real agenda: stop capitalism and industrialization.

yep Molson. These people will ban the patio heater and then jump into a private jet and fly somewhere 5,000 miles away for a global conference about how patio heaters are causing global warming. They are such vile hypocrites. Just - ARRGHGHGHGH! Their hypcrisy knows no bounds, no limits.

Hail right back at you, Modesto.

Agree witchoo Don. They want to outlaw patio heaters but, as I commented to Molson, they will hop onto a chartered jet and fly 5,000 miles away for a conference about global warming. What a bunch of hogshit.

Thanks for commenting and visiting, Molson, Modesto and the nefarious Don Long.