It's nice to see that Nanny Peloshit has time to redo the menu, but she and the rest of her cabal of Socialists have no time to do anything that benefits the rest of us - you know - the rest of us, the little people that Peloshit and her cronies claim they care so much about.

Politico has the story of Nanny Pelosi
changing the menu to one that is more refined; one for a hoity-toity palate:

The processed cheese has been replaced with brie. The Jell-O has made way for raspberry kiwi tarts and mini-lemon blueberry trifles. Meatloaf has moved over for mahi mahi and buns have been shunted aside in favor of baguettes.

But there can be a downside to delicious. Not everyone is happy with the enhanced offerings. Many congressional employees have complained that as the food quality has increased, so have the prices.

“I really don’t like Nanny Nancy telling me what I can and cannot eat for lunch. If I want to eat unhealthy, I should have that choice!” the aide fumed.

Republican aides have raised questions about why the cafeterias now stock Stonyfield Farm yogurt, speculating that the move would line the pockets of the company’s CEO, Gary Hirshberg, a significant player in Democratic politics.

There is pan-roasted Chesapeake rockfish with sweet potato fennel hash and yellow pepper relish. Pears with Stilton cheese and watercress. Cumin-scented leg of lamb with almond couscous. There are vegetables with funny names, like bok choy, arugula and jicama. There are baked goods with Italian names, like biscotti, focaccia and frittati.

There are things that are free of other things, like “cage-free shell eggs,” “rBGH-free milk” and “free-range chicken.” And things that we don’t know what they mean, like turkey escabeche (salad), red pepper coulis (sauce) and seared barramundi (fish).

The "new" DemocRAT Congress is making Roman gluttony look like frugal meals and food. No doubt we will learn of kickbacks and paybacks to some food producer with ties to Nanny, Harry Reid, Cluck Schumer and the rest of the LPOS. 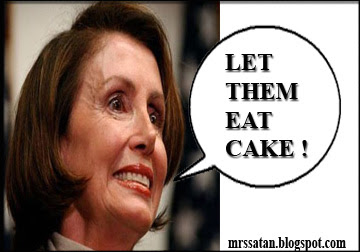 This woman is a .