Did you see the image and footage of Bill Clinton sleeping during the Martin Luther King, Jr. Memorial?

Whew - it sure is a good thing he's a Liberal and can escape any criticism from the Liberals and Progressives for what is really rude and disrespectful behavior. Can you imagine the outrage the Left would manifest if George H.W. Bush feel asleep during a Martin Luther King, Jr. memorial service? Or if it had been, say, Newt Gingrich or Tom DeLay?

I wonder what Bubba was dreaming about? 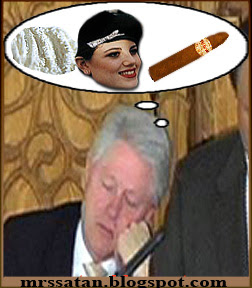 Which political party occupied the White House in 1968 when Martin Luther King, Jr. was assassinated? The Democrats.

Which political party made it their business to spy on Rev. King? The Democrats.

Who was in the White House when he was killed? Lyndon Baines Johnson, a Democrat.

Who was the United States Attorney General who authorized the wiretapping of and spying on Rev. King? Why, it was Robert F. Kennedy...a Democrat. (1)

Yep, them Dems sure have a great record on Civil Rights, spying and wiretapping, don't they?

In related news, I heard on Monday a report on the top-of-the-hour radio news of Bill Clinton saying that, "he cried the day Martin Luther King, Jr. was shot."

Was it the same kind of crying as you did below, Bubba, leaving the funeral of Ron Brown, your Secretary of Commerce that you had killed via a plane crash?

Ha ha ha - that's funny, laugh it up Bill - funerals are a riot, aren't they? Uh-oh, there's a camera! Look down, pretend you're sad, fake some crying. Pretend you're wiping tears from your eyes. Very good Bill, you fooled almost nobody.

Why doesn't the Conspiracy Believing LefTards ever bring up the conspiracy and controversy of Ron Brown being shot in the head?

Oh...well, there you go again, Dave, spreading conspiracy rumors about the Liberals when "everyone" knows that it's only the Republicans who plan, control and execute conspiracies. Yeeeeeaaaaaaaaahhhhhhhhhhh...right.

Comments:
Oh that clip of Big Fat Buttery Bill wiping away his tears of laughter is just too precious.

He is such a phony, isn't he? If he hadn't gone into politics he probably would'a been a decent, believeable actor. What a pile of Big Fat Buttery shit, though...to borrow a few of your terms!