Over 400 prominent scientists from more than two dozen countries recently voiced significant objections to major aspects of the so-called "consensus" on man-made global warming. These scientists, many of whom are current and former participants in the UN IPCC (Intergovernmental Panel on Climate Change), criticized the climate claims made by the UN IPCC and former Vice President Al Gore.

This blockbuster Senate report lists the scientists by name, country of residence, and academic/institutional affiliation. It also features their own words, biographies, and weblinks to their peer reviewed studies and original source materials as gathered from public statements, various news outlets, and websites in 2007. This new" consensus busters" report is poised to redefine the debate.

Many of the scientists featured in this report consistently stated that numerous colleagues shared their views, but they will not speak out publicly for fear of retribution.

Former Vice President Gore has claimed that scientists skeptical of climate change are akin to a "Flat Earth society members," and similar in number to those who, "believe the moon landing was actually staged in a movie lot in Arizona."

The distinguished scientists featured in this new report are experts in diverse fields, including: climatology; oceanography; geology; biology; glaciology; biogeography; meteorology; oceanography; economics; chemistry; mathematics; environmental sciences; engineering; physics and paleoclimatology. Some of those profiled have won Nobel Prizes for their outstanding contribution to their field of expertise and many shared a portion of the UN IPCC Nobel Peace Prize with Vice President Gore.

On one side of this issue we have Albert Gore, Junior, who is not a scientist in even the most remote, generic term.

On the other side we have scientists, climatologists, geologists, biologists, meteorologists, oceanographists, chemists and others who are trained, educated and have degrees in their specific fields who disagree with Gore and the United Nations that the slight increase in temperature has nothing to do with humans and industrialized nations.

If this is such an easy slam dunk for the Man Who Would Not Be President, then why won't he debate with those who disagree with him? Why does he continue to duck their offers to debate?

If Gore can dismiss his skeptics as easily as those who believed the earth was flat or that the moon landing was faked, then why won't Gore get his fat ass up on the stage and debate his critics and make them look like the fools he claims they are?

Why won't Gore do this? What are you afraid of, Albert? Could it be he is afraid of being proven wrong? Of being proven the huckster and charlatan that he really is? 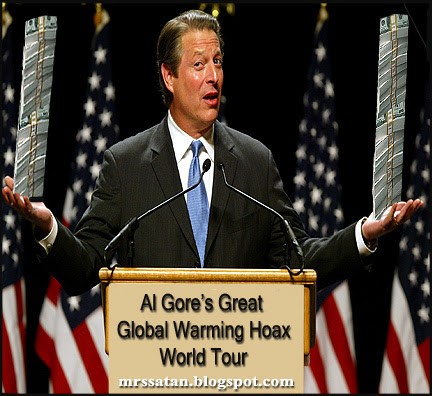