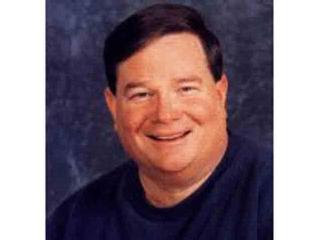 The Liar Of The Left, , , Liberal Radio Talker Bernie Ward

San Francisco radio station KGO Uber-duper Liberal Talker - whom they affectionately bill as "The Lion of The Left" - Bernie Ward has been charged and indicted on two counts of child pornography using the Internet. MSNBC:

Ward's lawyer, Doron Weinberg, said his client, 56, pleaded not guilty to the indictment before a federal magistrate in San Francisco on Thursday.

Weinberg said the case stems from an "error of judgment" Ward made when he spent a few days in 2004 looking at pornography images and exchanging images with other adults when doing research for a book on hypocrisy.

The attorney said, "It's really tragic that the government has decided to prosecute him for a judgment he made as a journalist and to treat him as a child pornographer when he is not."

Ward's lawyer tells KGO that the incidents in question are from more than four years ago and were a part of research for a book.

His lawyer says that as part of the research, Ward downloaded a few images of child pornography.

The specifics of the allegations against Ward remain under seal. Ward is often called the Lion of the Left for his liberal views.

Well, if Ward was in fact doing (ahem, cough cough) research for a book, then why did he exchange the images with other adults via the internet? TransWorld News:

Maybe Bernie hasn't completed the book by now because he's typing with one hand and his other hand is busy...oh, never mind.

...worked for then-Rep. Barbara Boxer as her chief legislative assistant.

Well, I bet ol' Babs is nowhere to be found these days to issue a statement at what a wonderful , , Chief Legislative Ass Bernie was. Ah, such is the friendship within the Circle of Liberals.

Which Lefty Blogs are writing about this story? Well - to be honest - I didn't invest much time cruising the internets to find out if DailyKooks, DU or the other members of the Retarded Left are treating this story the same as they would as if, say, it was a Conservative Talker indicted for the same type of charges.

I did search through the first 3-4 pages of Google's Blog Search tool and - by golly - I didn't notice any Liberal blog "hit results" that they are writing about their little perverted Lion of The Left. Boy, those Lefties sure have their fair and balanced treatment of news items like this one, don't they?

What is it about Lefties that so many of them are such purveyors and molesters of children and who exploit children every chance they can? They just can't keep their sick, twisted and kinky, oily hands off children. They are not content to have a physical relationship with consenting adults. No, they go after the children...the children they claim to care so much about.

Ward, of course, is presumed innocent until proven guilty. And, in my opinion, him being found guilty is simply a matter of time.

Comments:
Though they won't openly support him, you know deep down they are on his side; most of them, anyway.
Them being the NAMBLA party and all...

So right you are JimmyB. Many of us - especially Conservative bloggers - recall Charles Rust-Tierney, for Virginia ACLU honcho caught with tons of child pornography that he was exchanging with other pervs via the internet. There HAS GOT TO BE a very special place in hell for these people and that's exactly where they deserve to be. Thanks for visiting JimmyB.

Excellent point, Molson - of pervy Ward not even being on the radar if his transgressions were as minor as he and his lawyer claim. Very doubtful in my mind this guy is as innocent as he claims. Research for a book...I call Bullshit!

Thanks for visiting and commenting, as always Molson.

I think he will plead guilty or make a deal to avoid having the sordid details released.

Could be Anony. Time will tell. I tend to believe what he actually did are far more serious offenses than what is being published in the media.