Obama Did The Drugs

I've been meaning to mention the stories of Democrat Presidential candidate Barack Osama Hussein Bin Obama acknowledging his past use of marijuana and cocaine. AP:

Obama has written about his drug use in his memoir, "Dreams from My Father."

"Junkie. Pothead. That's where I'd been headed: the final fatal role of the young would be black man," Obama wrote. Mostly he smoked marijuana and drank alcohol, Obama wrote, but occasionally he would snort cocaine when he could afford it.

Drugs, Obama wrote, were a way he "could push questions of who I was out of my mind, something that could flatten out the landscape of my heart, blur the edges of my memory."

Some find Obama's admission as "Public reconciliations have always borne a suspect character, and people ought to be held accountable for their transgressions, not praised for their willingness to share stories of those transgressions."

I'm not going to be voting for Obama, but he did the right thing by admitting his past life as a druggy. Which by no means means I'm above making fun of it: 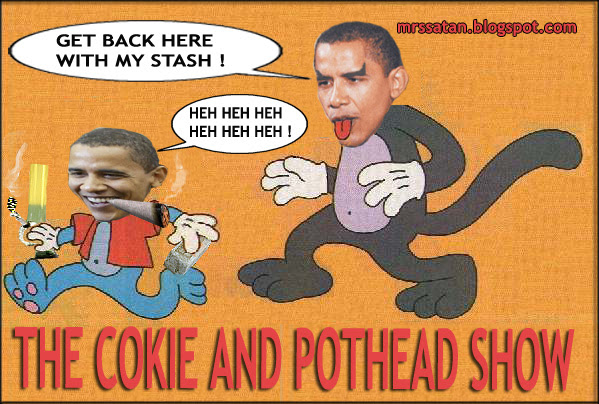 Comments:
OMG. you are missing the painted on blackfaces.

uh, what? It's an Itchy and Scratchy image, from the Simpsons; found via basic google image search. what were you thinking it was?

Hey at least Osama knows how to inhale. Wink. Wink.

I thinks those are the lyrics, eh Molson?