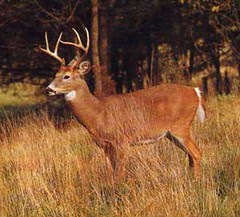 With more than 475,000 firearms deer hunters in the state, the Minnesota Department of Natural Resources encourages hunters to purchase their licenses early to avoid long lines and any system issues associated with the high sales volume.

Remember to wear blaze orange clothing (as is the law) if you are a Republican, an Independent, a Conservative or a Libertarian.

I encourage Democrats, Liberals and Progressives to enter the woods wearing light brown-colored clothing, a white handkerchief hanging from the back pocket of their pants and be sure to wear some type of hat that has antlers attached to it.

Kerry - who is rumored to have served in Vietnam - said in October, 2004, that "I go out with my trusty 12-gauge double-barrel, crawl around on my stomach. I track and move and decoy and play games and try to outsmart them. You know, you kind of play the wind. That's hunting."

Clearly Kerry has never been deer hunting in his entire life. Rolling around the ground on his stomach? No one I know deer hunts this way - no one.

Kerry says he "plays games" with the deer. Like what kind of games, John...Yahtzee? Connect Four? Canasta? I'm betting that the deer wins every time.

In an undated photo below, Kerry plays a losing game of Hungry Hungry Hippos against a buck deer: 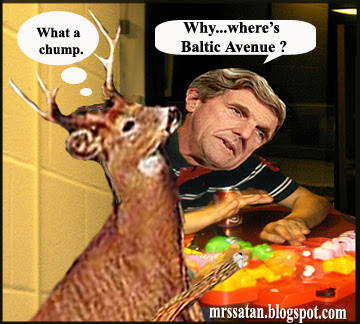 Comments:
i pretty much put my deer stand up over the railroad tracks. haven't got one yet, but the damned trains slow down now.

You must be near one of the stops of the Hooterville Cannonball. Are you staying at the Shady Rest Hotel?

actually, the bar and grill that burned down back a few.

"And there's Uncle Joe, he's a movin' kinda slow, at the Junction."

Uncle Joe had the greatest job in the world. Prob didn't pay much, but he never broke out in a sweat.