Hillary Plants Questions In Her Audience

Last week Democrat Presidential Candidate Hillary Clinton's campaign was exposed for planting questions in her audience. The campaign quickly began spinning stories that planting favorable questions within the audience is not something that is encouraged. Scarlet And Black:

...the Clinton campaign also denied the practice of planting. “It’s not a practice of our campaign to ask people to ask specific questions,” said Mark Daley, Clinton’s Iowa Communications Director. Daley said that when an event is focusing on a specific topic, such as health care or Iraq, “people are encouraged to ask questions in these regards,” but denied that they are given specific questions.

But when directly asked if his statements meant that planting does not occur in the Hillary campaign, Daley could only say, “to the best of my knowledge.”

“[Planting] is not something that is encouraged in our campaign,” he said.

That is certainly an interesting revelation considering that the questioner of last week's planted question, Muriel Gallo-Chasanoff says that she was not the only plant in the audience. CNN:

The college student who was told what question to ask at one of New York Sen. Hillary Clinton's campaign events said "voters have the right to know what happened" and she wasn't the only one who was planted.

[Gallo-Chasanoff] said a senior Clinton staffer asked if she'd like to ask the senator a question after an energy speech the Democratic presidential hopeful gave in Newton, Iowa, on November 6.

"I sort of thought about it, and I said 'Yeah, can I ask how her energy plan compares to the other candidates' energy plans?'" Gallo-Chasanoff said Monday night.

According to Gallo-Chasanoff, the staffer said, " 'I don't think that's a good idea, because I don't know how familiar she is with their plans.'"

He then opened a binder to a page that, according to Gallo-Chasanoff, had about eight questions on it.

"The top one was planned specifically for a college student," she added. "It said 'college student' in brackets and then the question."

Topping that sheet of paper was the following: "As a young person, I'm worried about the long-term effects of global warming. How does your plan combat climate change?"

"After the event," she said, "I heard another man ... talking about the question he asked, and he said that the campaign had asked him to ask that question."

The man she referenced prefaced his question by saying that it probably didn't have anything to do with energy, and then posed the following: "I wonder what you propose to do to create jobs for the middle-class person, such as here in Newton where we lost Maytag."

[Gallo-Chasanoff] said the "head of publicity for the campaign," a man whose name she could not recall, had no factual disputes with the story. But, she added, a Clinton intern spoke to her to say the campaign requested she not talk about the story to any more media outlets and that if she did she should inform a staffer.

And another individual says he was a plant in the audience:

A second person has a story similar to Gallo-Chasanoff's. Geoffrey Mitchell of Hamilton, Illinois, on the Iowa border, said the Clinton campaign wanted him to ask a certain question at an Iowa event in April.

"He asked me if I would ask Sen. Clinton about ways she was going to confront the president on the war in Iraq, specifically war funding," said Geoffrey Mitchell, a supporter of Sen. BarackObama, D-Illinois. "I told him it was not a question I felt comfortable with."

But hey - come on - we know that planting questions is not encouraged by the Clinton Campaign because Communications Director Mark Daley says so.

"Planting is not something that is encouraged in our campaign."

The National Ledger is reporting that the Clinton Camp is warning Wolf Blitzer not to "gang up on Hillary" at the debate this Thursday :

A report from Matt Drudge appears to suggest that the democratic frontrunner is still reeling so much from her disastrous performance at the last Democratic presidential debate that her camp is reaching out in what sounds like a threatening way to CNN and their host Wolf Blizter.

The item on the front page of the Drudge Report has this: "CNN's Wolf Blitzer has been warned not to focus Thursday's Dem debate on Hillary (Clinton). 'This campaign is about issues, not on who we can bring down and destroy,' (a) top Clinton insider explains, according to the report that is now posted.

"Blitzer should not go down to the levels of character attack and pull 'a Russert.'' (Camp Hillary believed that NBC's Meet the Press host Tim Russert was too tough on Hillary by asking her direct questions). Blitzer is set to moderate (a CNN) debate from Las Vegas, with questions also being posed by Suzanne Malveaux, the report notes.

After MrsSatan's disastrous performance in the debate on the question of driver's licenses for illegal immigrants, her husband Bubba came out swinging in her defense. AP:

...in defense of his wife against political critics, Bill Clinton cited the "swift boat" television ads of the 2004 presidential campaign that questioned John Kerry's patriotism and the campaign commercials in 2002 that suggested Sen. Max Cleland of Georgia was soft on terrorism.

Planting questions in the audience is nothing new for the woman who has "always been a Yankee's fan." Her campaign has been doing it as far back as her 1999 Senate Campaign as covered on November 23, 1999, on The News With Brian Williams on MSNBC and noted at the HuffPooPo:

ANNOUNCER: From NBC News, this is THE NEWS WITH BRIAN WILLIAMS.

We have a lot to tell you about tonight, beginning with what had become a whisper campaign of late, and it went like this: After what turned into a somewhat disastrous trip to the Middle East and with polls showing she should not run, Hillary Rodham Clinton just might pull out of the race for Senate from New York. Well, today, the first lady, responding to a planted question at a Teachers Union event made it clear she is in the race for the US Senate.

The aggressive Yale-educated lawyer is most certainly in for the fight of her life. But today was about looking ahead to all that she says she plans to do for New York and its residents. Part of today's announcement, however, was somewhat overlooked and that is, the first lady will soon begin living apart from the president. The White House will be without a first lady, while the president's wife moves to New York and runs for office. She does so without the blessing of some New York Democrats. We'll hear from one in just a moment.

First here tonight, NBC News correspondent Andrea Mitchell on the woman who says she's in it to win it.

(voice-over): Under pressure to either get in or get out, Hillary Clinton finally makes it official by answering a prearranged question from a friendly union leader.

HILLARY CLINTON, FIRST LADY OF THE UNITED STATES: I believe that if we work together, we really can make a difference for the children and families of New York. So the answer is yes, I intend to run.

It's amazing that the smartest woman in the world is really....um...not that smart. Devious, yes; smart, not so much.

Oh well, it really doesn't matter. She'll still find a way to steal the White House, rig those voting machines, getting cemetery residents to vote for her - you know - that kind of stuff. 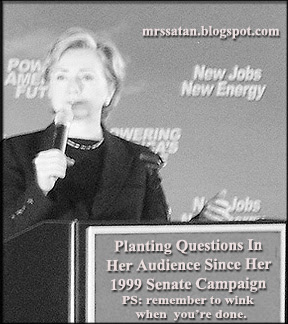 Comments:
Hillary the smartest woman? If I were a woman, I would be deeply insulted by that assertation. As you have stated before DD, she is a total cuntess.

heh - she be the cuntess in chief, no doubt!!

Hey, saw the new photos up at your place yesterday. Man those look like some treacherous and physically challeging mtns to hike. Whoa! Don't know if my "runied by high school basketball" knees could take it!

shit i thought at first you said she had plants in her audience and i was scared that ollie north might have crossed over. whew!

Ummm, Rev - I beleive you are thinking of James Brady.