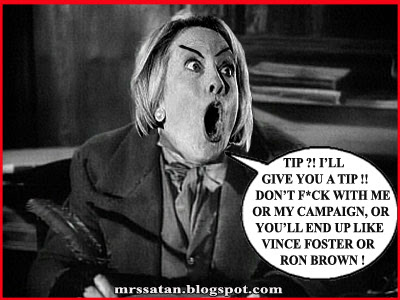 The Democrats are spinning to spin a favorable story that Hillary Clinton did tip a waitress in Iowa. It sure sounds like she didn't tip, but then the Dem Spin Machine kicked into cycle, spinning the story that she did tip.

ABC News Blog says she didn't tip. (And we all know ABC News carries water for the Dems better than does CNN):

The New York senator, joined by local political luminaries Christie Vilsack and Ruth Harkin, enjoyed a famous loose meat sandwich and attempted to hand caucus cards to the Iowans inside.

Clinton also spoke to one of the diner's waitresses, Anita Esterday. It was her first day on the job and she and Clinton shared a short exchange. Esterday, who has three jobs and works 12 hour shifts, said to Clinton "both of my sons have worked since they were 14 years old"; Clinton told her, "I'm proud of you."

But, according to Esterday, that's where Clinton's gratitude ended as the campaign crew left with nary a gratuity for any of the hard working Maid-Riters.

"I mean, nobody got left a tip that day," Esterday said in an interview with NPR after a visit by Senator Clinton.

National Public Radio reports that Hillary didn't tip, but then adds an updated Editor's Note to the story clarifying that a campaign staffer paid the bill and tipped. Note that this still doesn't absolve Hillary - the way I read it, she didn't tip - "the campaign staffer" did.

Editor's Note: Since this story aired, Hillary Clinton's campaign contacted NPR to say that the campaign paid Maid-Rite a bill for $157 the day of Clinton's visit and left $100 in tip money. NPR contacted Maid-Rite manager Brad Crawford, who confirmed that a bill was paid and tip money was left. Crawford, who was not in the restaurant at the time, said that he believes a campaign staffer left the money with one of his employees, but "where Hillary was sitting, there was no tip left." Neither Anita Esterday nor the manager on duty that day were available for comment as of noon Thursday.

'Nobody Got Left a Tip'

"I wished I would have been asked first," the waitress, Anita Esterday, said of Clinton's decision to insert her in a speech. "I wish she would have asked if she could talk about me later. I didn't like it when someone called me up and said Hillary Clinton is talking about you. It's like, what'd I do now? What's she saying?"

When I returned to the Maid-Rite a few weeks later, Esterday said the senator had caught her off guard. But once they got talking, she was honest with Clinton about her need to work two to three jobs.

"I've been doing it all my life. Why should it change now that I'm old," Esterday said.

Esterday does not think Clinton got it. "I don't think she understood at all what I was saying," Esterday said. "I mean, nobody got left a tip that day.

This wouldn't be the first time Hillary stiffed a wait-staff. Drudge has the Washington Times cache story of Hillary stiffing the Village House restaurant when she was campaigning for her Senate seat in February, 2000:

Hillary Rodham Clinton dropped into the Village House, a favorite diner in this upstate farming town, and ordered two orders of scrambled eggs, home fries and rye toast. So far, so good. The locals appreciate a hearty appetite.

Her breakfast was on the house, and when she left the waitress, a single mom, found not a penny at her plate.

[Restaurant owner Alex] Mitrousis, who emigrated to the United States from Greece decades ago, says the first lady's failure to leave a tip does not bother him and that it was "an honor" to have the first lady stop there.

You make up your own mind on whether MrsSatan left a tip or didn't. Me - I believe what I've always believed about Democrats - that they're cheap, all of 'em, all the time. Cheap, money-hungry avaricious, greedy little creatures who want freebies and want others to pay for whatever it is they want.

Comments:
you are such a smartass. you think your so clever.

The words "Clinton" and "loose meat sandwich" should never appear in the same paragraph again!

I bet you're a big fan! Thanks for visiting and commenting.

How did I miss the "loose meat sandwich" line? That's why you're on the payroll, dude.

Hillary didn't tip because she felt it was more efficient to give nothing so that the IRS or the FBI or the FCC or whatever didn't have to come and seize the assets later. It's Hillary's contribution to smaller government... and you guys didn't think she cared except for Anony that is.

It's all for "the common good", right Molson? Yeah. She's such a cuntess. Whenever I look at her she causes me "shrinkage" in the Seinfeldian way. God help us and the world when she becomes the prez.

Nice new pics at Hiking CO, dude! Very nice! You make another trip or are those from the last one?

Nope. I have pictures from trips going back to October 1995 which was the first time I ever went to CO. I've been to CO every year since. Although some years I didn't get many photos due to camera failure. The mountains are very unforgiving of photographic equipment well that and my beer soaked brain. Speaking of which, it's time to marinate my thinking organ yet once again :-)

Well they certainly are some really nice photos - I sure think so!

I heard the them talking with the waitress in question on NPR. After her remark about the lack of a tip was aired, she said a staffer came back and told her they had added $100 to the Visa charge, which was to be evenly distributed among all the workers there. She told him that their system doesn't allow tips to be added to a credit card charge, it has to be left in cash. At which point, he said, "Oh well, then, someone left $100 in cash."

It was obvious that he was just making it up as he went along.

Thank you for the additonal info Alandp! Good hearing from you again. Don't be a stranger!