During a campaign stop in South Carolina, Republican Senator and Presidential candidate John McCain was asked - asked by a woman, mind you - "How do we beat the bitch?"

The person asking the question was a woman. WND:

A single word has taken the campaign for the presidency to a new level, as a woman at a South Carolina political event for Sen. John McCain asked the Arizona Republican, "How do we beat the bitch?"

The question was an apparent reference to New York Democrat Hillary Clinton and drew an instant outburst of laughter from those attending the event...

"May I give the translation?" McCain clowned as he began his response. "That's an excellent question. I respect Senator Clinton. I respect anyone who gets the nomination of the Democrat Party."

"There was a poll yesterday," he continued, "that shows me three points ahead of Senator Clinton in a head-to-head matchup. I respect Mrs. Clinton."

McCain handled the question with diplomacy. Many Libs have whined he should have reprimanded the lady who asked the question. Uh - no - he shouldn't have. The lady is entitled to her own opinion and free speech - you Libs remember Free Speech, don't you, you always site it when you're busy burning the U.S. flag - and if she wants to call Hillary a "bitch", then it's certainly her right to do so. 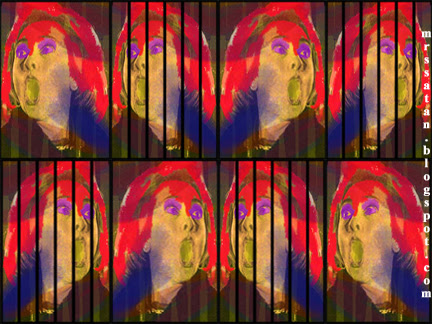 Personally, I would have called Hillary a . That's what she really is. A pus-filled, scabbed, diseased .

The crying, whining, Baby-crats have crawled out of the woodwork and are spitting up pablum just like babies do over calling Hillary a "bitch". Some classic LiberTard comments:

A WOMAN ASKED THAT QUESTION.

Whether you like her or hate her, don’t you think it’s amazing that a woman would refer to her as the B word?

We are in an amazing presidential race in 2008. A black man and a woman are vying for the top job in the country. It doesn’t have to be white men all the time. That’s amazing.

And what do we get from our sisters? “How do we beat the B..tch?”

Depressing.
Posted by Pat Walker at 11:31 am

1. that is a completely sexist and insulting post. it should be equally depressing to you if a man said it. or it shouldnt be depressing at all. this is still america…we are all entitled to our opinions. Comment by: mrs werth - 11.14.2007 at 11:35 am

Any Lib out there who can explain how it's sexist for a woman to call another woman a "bitch"?

Apparently the Dems and Libs haven't been paying attention to themselves for that past seven and eight years because name-calling is all they've been doing.

On Tuesday, CNN's Rick Sanchez raised the question of whether McCain should have admonished the woman, and McCain's campaign criticized that criticism on Wednesday.

"Most people who have seen it are looking at it as a real mistake on his part in terms of the way he handled it," Sanchez said on the cable network's "Out in the Open."

McCain's South Carolina campaign manager, Buzz Jacobs, said in a statement Wednesday: "It not only reflects poorly on him, but on CNN. If Mr. Sanchez had even the faintest perspective on the race for the White House, he would know that Senator McCain has expressed his utmost respect for Senator Clinton numerous times on the campaign trail, as he did at Monday's event in Hilton Head."

Meester Sanchez was outraged on his November 13 CNN show - oops - "Out In The Open", the following a "rush transcript" from CNN itself:

RICK SANCHEZ, CNN ANCHOR: You know, this could be real bad for John McCain. I want you to watch this that we're about to show you. You will probably see its first pass here, and then I have a feeling you will be seeing it a lot.

Producer comes in early in the morning today to my office and shows me this video. You are going to hear a McCain supporter. She refers to Hillary Clinton using really what is a horrible word that is used to do nothing but demean women.

Well, at the time, it was a supporter who said that. It wasn't until later on, when we watched the whole tape, which is what you are about to see, that you see McCain's reaction, or lack thereof, that we decided that this is both relevant and newsworthy, and important information to this campaign.

All right. Let me set it up for you. He's campaigning in South Carolina yesterday when suddenly this happened. Obviously, the word that is used here is very offensive. We will let you listen to the entire thing so you can decide for yourself. Here it is.

Then they run the video clip.

This is a fellow senator that he's talking about. No matter what you think of Hillary Clinton, is John McCain done as a result of this? Is this going to become a viral video? This is the kind of questions that we got to examine at this point. We're going to be looking at a lot of these issues.

Liberals have a short and selective memory. They never let go of George Allen's "macaca" remark. Their never-ending and hyperbolic politicalization of "macaca" is what probably lost the race for Allen.

Here's a question for all the Liberals, all the Dems, for Tag-Team Duo Jesse Jackson and Al Sharpton and especially for Meeeester Reeeeeeeck Sanchez:

We're one year into hardcore campaign fatigue, yet one of the most serious allegations of racist language has never been broached. No one on the campaign trail has asked it, no one has asked it during any of the Democrat debates.

Would any Republican or Conservative escape questioning if allegations were made that they used the "N-Word" or uttered the foul phrase, "You f-cking Jew Bastard"? I bet Tim Russert or Chris Matthews or Tavis Smiley would have raised this issue if a Republican were accused of it.

The issue is some of the racist and anti-Semitic slurs with which Hillary commonly laced her tirades against her husband were "Jew motherf-cker," "Jew Boy" and "Jew Bastard."

Larry Patterson, Clinton bodyguard from 1986 to 1993, says, among others including Dick Morris, that he often heard her use the words "N-gger", "Jew Motherf-cker, "Jew Boy", "Jew Bastard". Source

Paul Fray, who ran Bill Clinton's failed 1974 congressional campaign in Arkansas, told Fox News Channel, "Sure, she did," when asked if Hillary called him a "f---ing Jew bastard." Source.

Dick Morris, who used to be thisclose with the Clintons confirms that Hillary used these words.

Why has no one asked The Bitch about this? Typical Liberal selective memory and selective outrage. But this same crowd will pee in their panties and feign outrage when someone refers to Hillary as "a bitch".

Everyone but the Socialists sees through the hypocrisy of the Libs and Dems. Everyone is wise to their machinations of partisan politics and double standards.

Hillary a "Bitch"? Is there anyone who didn't already know this for the past twenty years?

Comments:
heh - Hillary supporter, surely you didn't think your comment would be approved for publication, considering your blatant attempt to direct people to donating campaign money for her, did you?

What flavor was the Kool Aid you drank just before you wrote your comment?

Now...if you want to buy advertising on my blog, let me know. I'm not averse to running an ad for her, provided you PAY ME to do so.

Refill on the Kool Aid?

The above comment is not directed to dirtyword - but the same applies. If you want to buy advertising on this blog, just lemme know.

Boy the Lems just don't give-up do they? They will shamelessly shill anywhere, but what we are really concerned with here is Hillary a bitch? Well does a cow's ass attract flies? See sometimes you can answer a question with a question. Haha.

Yeah, they're just like the monkey story I wrote about a month or so ago, where the monkeys invaded some village in India (I think) and were making a mess and, to quote one guy "they defecate all over the place."

I wrote that this is more proof that Dems descended from monkeys. They make a mess of everything, shitting all over that other people have to clean up.

Some pansy asses are offended that Hillacunt was called a bitch. It'd almost be sad if it wasn't so funny.

Thanks for commenting, Molson. You're part of the good team!!

If the truth hurts...

& I think it does to the delicated Dems, Arc.