The children's toy Aqua Dots - made in China - has been recalled because the game contains the date-rape drug gamma-hydroxy butyrate. Bloomberg:

A Chinese-made toy containing a chemical linked to the so-called date-rape drug was recalled yesterday after two children fell ill.

The recall of Aqua Dots, distributed by Toronto-based Spin Master Ltd., follows the withdrawal of millions of consumer products made in China and Mexico over concerns about high- levels of lead and toxic chemicals. Consumer fears about harmful toys may affect holiday spending, with 35 percent of shoppers believing that products made outside the U.S. aren't safe, according to a Nov. 1 study by Deloitte & Touche LLP.

Aqua Dots, which features small beads that bond with water, are made with a chemical the body converts to gamma-hydroxy butyrate, commonly known as the date-rape drug. 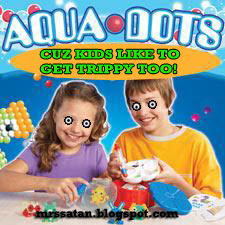 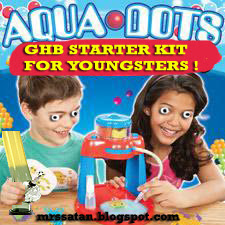 Comments:
What? Don't buy Chinese made crap? How the hell is Hillary going to fund her campaign...err... I mean coronation.

i told you so!

Good point Molson. Maybe her funny Chicom money will be tainted with GHB and she'll flashback to the 60s?!??

I agree Rev. Now go play with your Aqua Dots For Post-Teens toys. See that glowing Moses, talk to him, he'll listen. Take notes, too. Let me know hot it goes.