Well, it seems Ratty doesn't know or remember how she fell down, went boom. The NY Post:

Liberal radio talker Randi Rhodes was back on the air yesterday, and she kicked off her show by saying she doesn't know how her face got smashed Sunday afternoon outside a bar near her Murray Hill apartment.

"I was watching football in an Irish pub," Rhodes told listeners. "I went out to smoke a cigarette, and the next thing I knew I was down on the cement, face down, bleeding."

Fellow Air America host Jon Elliot said on Monday that Rhodes had been mugged at the corner of Park Avenue and East 39th Street, and reportedly wondered if it was "an attempt by the right-wing hate machine to silence one of our own."

But on the radio yesterday, Rhodes repeated the story given out by her lawyer earlier in the week - that she didn't know what happened.

"I don't know if someone hit me from behind, or if I fainted because I hadn't eaten all day," Rhodes said.

"My fall wasn't broken by my hand, but by my face and a steel grate on the concrete," she said.

"I don't know how or why the story grew to me being brutally beaten or attacked." Rhodes did not file a police report.

Rhodes "doesn't know how or why the story grew to [her] being brutally beaten or attacked." She did not file a police report. Well, well, well, isn't that quaint. I have a possible theory as to how the story grew. Perhaps it was due to a posting like the below screen capture which - amazingly - appears to have been spiked (removed) from the Daily KooKs site: 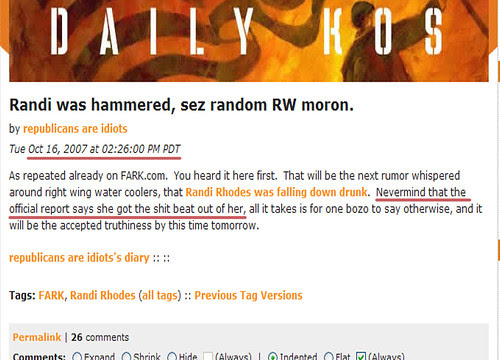 "Nevermind [sic] that the official report says she got the shit beat out of her..." Um - hey, "republicans are stupid" - yeah you, the writer of the post - who are you to call anyone "stupid". It sure seems that author "republicans are stupid" is just another Left Wing Moron. I - along with the entire blogosphere, would love to see the "official report" that you wrote about. Please produce it for us to review.

The posts for the KooKs site for October 16, pursuant to the time-stamp on the above post of 2:26:00 PM PDT runs from HERE to HERE, yet - the above post seems to have vanished into thin air. Huh - maybe it's another conspiracy?

We were told a few days ago that she fell while walking her dog, but there's no mention from her that she was doing just that. Besides, who brings their dog into a bar for any length of time.

It seems like Ratty was indeed inebriated, possibly reaching or exceeding Ted Kennedy Blood Alcohol levels, and she "can't remember."

Or, as I quoted in an earlier post, as T.C. so eloquent stated:

"Rhodes doesn’t know what happened; we professional imbibers call that 'a blackout'."

Better put some ice on that, Ratty!

Reproduction of Daily KoS screen capture in accordance and compliance with Fair Use Section 107 U.S. Copyright Code, for purposes of commentary, news reporting and criticism.