South Dakota state Senator Uncle Pervy Dan Sutton is being sued by the page that he molested. (Oh, uh - that he allegedly molested. Allegedly, yeah...riiiiiiiiiiiiiiiiiiiiiiight). Keloland:

The South Dakota Senator censured for allegedly sharing a bed with a legislative page now faces a civil lawsuit.

Nineteen-year-old Austin Wiese is suing Democratic State Senator Dan Sutton for sexual battery and sexual assault. Wiese claims that while sleeping in the same bed as Sutton during the 2006 legislative session, Sutton groped him several times.

Wiese's lawyer, former Governor Bill Janklow, filed the complaint in Stanley County court, because the hotel room where the alleged incidents happened is in Fort Pierre.

According to the complaint, Wiese has suffered mental anguish, shame, indignity, embarrassment, pain and suffering as a result of the alleged battery and abuse.

In the last legislative session, the state senate held a hearing to find out each person's side of the story. The senate could have expelled Sutton but instead censured him. They found there was not enough evidence that Sutton groped Wiese, but that Sutton acted inappropriately by sharing a bed with him.

Sutton was re-elected to the state senate in 2006 after the allegations against him were made public.

Why, it's downright amazing how those Democrat perverted purveyors of our nations' youth manage to get re-elected by the Pervy Libs who support them, isn't it? Hell, perverted Democrats aren't even asked to resign, they get re-elected! Amazing, simply amazing, something only a Democrat could finagle.

Wiese says Sutton groped him while they slept in the same bed, and now says he still is suffering mental anguish.

"I froze and I was just shaking. I didn't move. I couldn't move," Wiese told the Senate committee in January.

He spilled every embarrassing detail of what he claims Sutton did to him.

"I woke up and was looking at him, and he was literally sitting up in bed, and he was physically reaching for my crotch area again," Wiese said.

Sutton has never been charged with a crime stemming from the allegations. Still, the Senate could have expelled Sutton, but instead chose to censure him for sharing a bed with the page.

Now Wiese is taking the case to civil court.

It is interesting that Uncle Pervy Dan Sutton, according to Friends For Sutton that he is "recently married".
Hmmmmmmmmm...is his wife a beard?

Dan is very involved in the Flandreau community with being a member of the Flandreau Jaycees, Crystal Theatre Cultural Association Board of Directors...

Also, Dan was elected Minority Whip in the Senate.

Oh well, the Crystal Theatre...the Theatre (especially spelled "TheatRE") gives him away, doesn't it? He'll probably star in, and play the lead role, in the fall production of "The Unsinkable Molly Brown."

I'll bet he enjoys that Minority Whip, too! 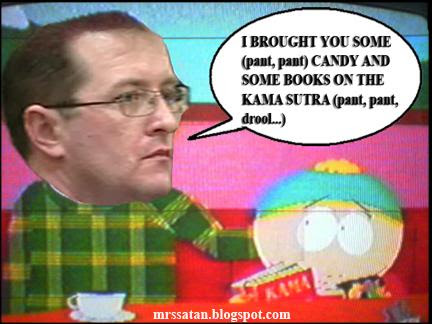 Left: Uncle Pervy Dan Sutton; Right: The next youth he will have a "game" with.

Comments:
surely you are not saying all dems are pervs dave? and surely you noticed it was repubs that pushed larry craig and his buddy in the house out? the dems hardly said a word.

after all, the dems be pervs anyway?

I'm saying all pervs are democrats.

And sissies and chickenhawks.

oh my god, ted is not only a bad example of and for everything but that is like dinosaur dung it's so old. what, what, could you not get some dirt on adlai stevenson?

uh, uh,uh, FDR screwed around and his wife was a lesbian....there you go, that is dirt!

ah, ah,lincoln was gay and his wife was a nut...even better!


come on you silly ass, you darn well know the repubs eat their own because they are so terrified of the evangelicals. it is not fair, it is stupid, but it is the bed they made for themselves.

when you sleep with jerry fallwel, you are gonna get crumbs in your bed.(literally now they come from him.)

yuck i just grossed myself out, and that ain't easy.

I just used as an example very well known dirt - that of Ted Kennedy.

You will not find a single post, let alone a single sentence, in this entire 2+year life of this blog(3 yrs old in Feb '08) where I have written or supported the Far Right Wing aka the Evangelicals.

It's pretty disrespectful to talk ill of the dead RE: Falwell. Unless it's me speaking ill of Ann Richards, Molly Ivins or Paul Wellstone, then it's entirely permissible and encouraged.

Look, I'm not going 15 or 20 rounds with you in comments like I did on the LPOS post. Just admit that the Dems hold to a different standard their own sexual offenders and predators than they do sexual offenders and predators who are Republicans. We know this to be true RE: Gerry Studds, Barney Frank, Mel Reynolds and others. Why should Republicans boot offenders out of their party when the Democrats don't? What good has it done for Republicans to apply a higher standard for themselves? It doesn't help them at all. They still get smeared by the Libs, notice how Mark Foley was smeared by the Libs as a "Child molestor" when there is no evidence to support that. Was Foley guilty of deplorable behavior - absolutely. But his transgressions did not involve any actual physical contact and the page that Liberals claimed was 16 yr old was actually 18 yr old - an adult by any standard with the exception of being legal drinking age.

Give me break. The Libs are perv and smear merchants. I treat them the same way they treat others. This is nothing new on my blog, I;ve done this from day one. Perhaps you didn't notice until now?

"why should Republicans boot offenders out of their party when the Democrats don't?"

i think that is what i said dave, but you will have to take that one up with the rnc.

i am also well aware of your stance on the evangelitards too.

yeah but not the right kind of fiber that I can smoke in my bong.