The Sissy Wants You To Forsake Your SUV

Yep, The Sissy Prima Donna John Edwards said that the American public needs to give up their SUVs. Heh, The Sissy is such a hypocrite - he doesn't want to give up his SUV, let alone his mansion and beach house. But he wants you and me to make do with less...so much less.

From Ben Smith writing at Politico:

Speaking to machinists in Florida today, John Edwards said he'd expect Americans to sacrifice their inefficient cars, and specifically to give up their SUVs, AP reports.

But campaigning turns out to be a pretty high-carbon practice. All the candidates ride around, particularly in Iowa, in big cars — Hillary rode an 18-wheeler; Obama rented an RV; and Edwards, whose convoy is often mini-van centric, had this Cadillac SRX Crossover (15 mpg) beside him in Iowa on his arrival from announcing his candidacy for president in New Orleans, according to his Flickr stream.

"John Edwards believes that all Americans need to be patriotic about something other than war, and that means conserving at home, at work, and in the cars they drive. 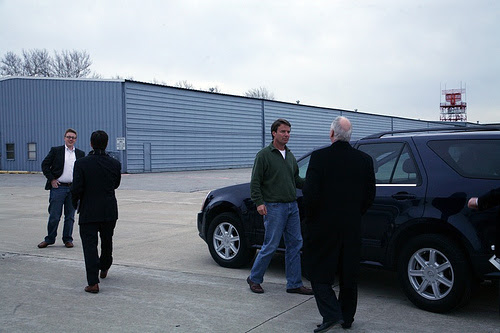 Comments:
Yes, but he came from nothing and has worked hard to have what he has! He's not going to apologize!

Which is crap! Like we haven't worked to have what we have?

He's a damn turd. I say we take a page from the Libs and start yelling about our civil rights being violated! If they try to mandate what we drive, we call them bigots and hate-mongers!!!

Give 'em some of their own crap.

Hey Groovy. I agree. Edwards hypocrisy is right up there with Al Gore. When I see Edwards move into a 2500 sq foot duplex maybe I'll stop considering him such a hypocrite. He'll still be a sissy forever.

Take care Groov. Thanks for visiting and commenting.

Edwards is a giant vermillion pulsating shaft of loveliness. What is it going to take to get this prick to shut his cake hole? Maybe Larry Craig has some ideas.

"Edwards is a giant vermillion pulsating shaft of loveliness."

HA! Oh that is a precious line! Ya gotta start a second blog and start ripping the Libs, my friend. You come up with some classic lines that rock!