John Edwards: The Haircut Gets Pricier

The Washington Post (that would be not FOX News for you Insane Liberal Clown Posse),
is reporting that some haircuts received by John Edwards were as high as $1,250:

[Hair Stylist Joseph] Torrenueva said one haircut during the 2004 presidential race cost $1,250 because he traveled to Atlanta and lost two days of work.

[When Edwards] campaign reported in April that it had paid for two of his haircuts at $400 each, the political damage was immediate. With each punch line on late night TV his image as a self-styled populist making poverty his signature issue was further eroded.

Edwards said that he was embarrassed by the cost and that he "didn't know it would be that expensive," suggesting the haircuts were some kind of aberration given by "that guy" his staff had arranged.

"That Guy"... "suggesting some kind of aberration in who was cutting his hair. 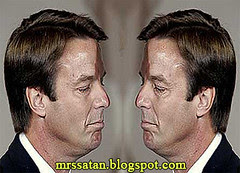 Eat your heart out, Ann Marie.

See, just like Edwards says, there are two Americas out there; there's John Edwards' America of $1,250 haircuts and then there's "That Guy's" America.