No One Listens But They
Demand To Be Heard!

Every time Talk Radio Arbitron ratings are released Liberal, or should I say Progressive, - (Liberals don't like to call themselves Liberals and instead use the euphemism Progressive because it sounds far less nefarious and obfuscates who they really are) - Talk Radio is at the bottom of the list except in a very few select markets, not coincidentally in largely populated "blue" cities. The response from those in Progressive Radio is accusing Conservative Talk Radio of having a monopoly of the airwaves and not giving Progressive Talk a "chance" in markets dominated by Conservative Talk.


It comes as no surprise then, that Liberal Talkers do nothing but whine "it's not faaaaair" that their programs aren't being heard in markets where advertisers aren't going to spend their money on programs where listenership doesn't exist or where the audience is minimal. Minneapolis' Air American station, AM 950, is a perfect example of this. When AM 950 hasn't sold a 30-second spot, you'll hear either instrumental music or static/dead air for that 30 seconds.

Instead of earning their success and working hard for more stations and markets to carry their programs, Liberal Talkers want it handed to them via the Fairness Doctrine. It apparently doesn't occur to Lefty Talkers that the success of Conservative Talk Radio has come from earning it. Nobody handed or gave Rush Limbaugh several hundred radio stations carrying his program at the start of his Talk Radio career.

The argument that the consortium of companies owning Conservative Talk Radio is shutting out Progressive Talk is one that is false. If Liberal Radio was a huge and successful ratings-getter, advertisers would be banging on the door to buy time on those stations and programs. But this isn't happening and the reason is that Liberal Radio doesn't come close in reaching the audience and market that Conservative Talk does.

If owners of any media thought that broadcasting a howling hyena on the air would get tremendous ratings sensation, we'd all be listening to The Howling Hyena Show.

If I - or anyone else for that matter - invents a software system that puts Microsoft to shame, the product will sell itself, becoming the successful and dominant operating system in the market. If the product is substandard to what already exists, and I cry that I deserve the same treatment as what is already the dominant and successful operating system, then I'm nothing other then I'm Ed Schultz, whining about how no one will buy my operating system.

And this is how this column all came about, by listening to Friday's Ed Schultz show with his whining about how he can't get his Lefty Radio program into more markets and stations. Gee Ed, could you be part of your own problem? You do remember your on-air meltdown and tirade against Air America, a network that carries your program, don't you? Maybe calling them "rotten business people", "undercutters" and "mean, nasty people [who] suck" played a part in the lack of syndication of your show? It's also interesting to note that you pulled and removed your ranting audio clip from your site. Well, fortunately I have in its entirety and it's at the bottom of this post.

Hey Ed, why don't you work for it instead of asking for it to be handed to you via the government and FCC regulations? Ed, maybe you're simply in the wrong country. Maybe you should relocate to Venezuela and become a mouthpiece of Hugo Chavez. I'm sure Hugo would like that, and Ed, you'd have the most popular and listened-to radio show there.

What Liberal Talkers want in their demands for Talk Radio "regulation" is analogous to me wanting to enter an Olympic race and demand - since the Olympic runners are in top physical shape - that they run at a slower pace to give me a chance of winning. This is what's called the envy of ambition and success and Lefty Radio is filled with it.

In the interests of not letting Ed off the hook, the following audio clip is his entire rant against Air America. I am reproducing his podcast of February 13, 2007 in accordance with U.S. Copyright Fair Use Section 107, "including such use by reproduction in copies or phonorecords or by any other means specified by that section, for purposes such as criticism, comment, news reporting, teaching... is not an infringement of copyright." And I'm specifically citing "purposes of criticism and commentary", especially since you scrubbed this particular podcast from your site.

Ed, eat your own words. Then blame others for your tantrum and wonder why you're not on more stations? What an ass.
Click on the

and listen to Ed's own words: 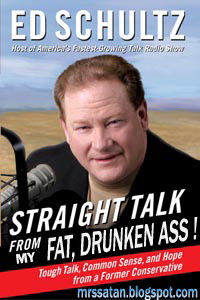 It's funny when Liberals cause their own pain and then whine and cry about it, isn't it?

Comments:
The people advocating this are fascist garbage. Kucinich, Boxer and the PIAPS? DhimmicRATS don't surprise me, but Trent Lott? He is a shameful disgrace.

The truth is that the phony and failing so-called liberal and progressive agenda is a sham and more people are waking up to it. The Left has a very weak argument that comes across even worse on the radio, and people just end up changing the channel.

Also, conservative talk on radio and cable always addresses and discusses so-called progressive ideology so they can logically show how inferior and flawed it is.

No one is stopping George Soros from pumping millions into a money-losing Air America and keeping it going forever. But it is just such a bad business model that apparently even Leftie Moonbat Soros can't stand donating endless drops of his bucket to it.

absurd thought -
God of the Universe says
CONTROL the media

socialists as dangerous
should never be exposed
.

I TOTALLY AGREE with you regarding Trent Lott. I just haven't yet gotten around to publishing about him.

You know, conservative talk - most shows - talk about issues and have variety. Hannity is the exception, his radio shows bores me to death and makes my ears bleed with his endless self-promotion.

And AirHead America wonders why it shows up on the Arbitron ratings below the "all static station"?