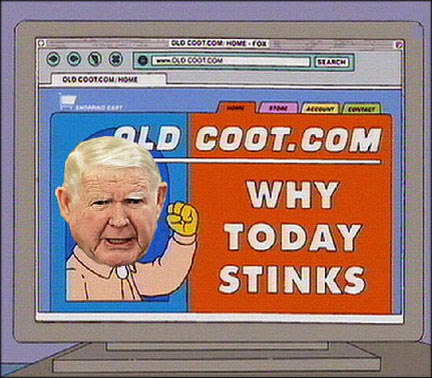 Pennsylvania DemocRAT and loooooooooooooong time U.S. House of Representative John "I claim to support the troops but don't" Murtha was on ABC's Sunday "This Week" with Georgette Stephanopoulos.

Among Madman Murtha's many dementia-induced rants, are the following pathetic statements:

"Absolutely," Murtha told George Stephanopoulos in an exclusive interview on ABC News' "This Week." "Our presence in Iraq, our occupation of Iraq gives these people the inspiration."

Murtha is "absolutely convinced the first step to stability in Iraq is redeployment."

When asked if Petraeus was included in his lack of confidence, Murtha added, "I'm waiting to see what he has to say. But I am absolutely convinced there has been this overly optimistic picture of what's going on in Iraq, while the figures show the opposite."

"We're inspiring these al Qaeda to go after our troops, who are so vulnerable because they're caught in this civil war between al Qaeda, between the Sunni and the Shia," Murtha said.

So...the U.S. is attacked on September 11, 2001 when we didn't have a Military presence in Iraq and now because we are there, we're the target of attacks like the foiled JFK Airport attack. And the 1993 World Trade Center Bombing. And the USS Cole Attack. And Khobar Towers - just to name a few that occurred before we were in Iraq.

Oh, and don't forget to bash General Petraeus well before his assessment date of September month-end. Hard to fathom that Murtha was a Marine. It must have killed him to fake patriotism for those years.

It's amazing what senility and rank partisan adherence does to DemocRATS like Murtha, isn't it? 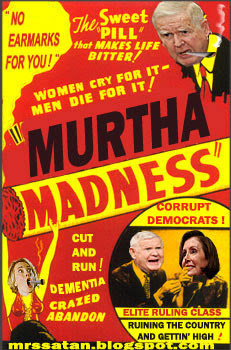